When you start to plan a public outreach and education campaign, a sense of humor may not be the first tool you think to reach for. You may instead focus on hard facts, thinking that logic alone will be enough to persuade people.

Without some pizzazz and personality, your public outreach campaigns risk being boring and forgettable. Use an appropriate humorous spin and your messages can stand out and be memorable.

Get ready to laugh. Here are public outreach campaigns that have successfully used humor to get their messages heard.

President Obama has done a lot of unconventional things to plug the Affordable Care Act. He has sat between two ferns with Zach Galifianakis and poked fun at presidential decrees on The Colbert Report. Recently, he had another viral hit with the video, “Things Everybody Does But Doesn’t Talk About,” produced by BuzzFeed in February 2015.

In the video Obama mocks himself, uses a trendy selfie stick, and uses other silly shenanigans in a skillful promotion of the Affordable Care Act’s 2015 open enrollment registration deadline and healthcare.gov.

Some people applaud President Obama’s sense of humor while others pan it. But, with over 50 million views of the video as of March 8 and the uninsured rate down to a record-low 12.9% in January 2015, a sense of humor has helped the administration connect Americans with Obamacare.

50 Shades of Conservation in California

The current California drought is a serious problem. However, negative emotions and messaging have been shown to be less effective at changing people’s behavior. Sometimes a positively seductive approach can be more beneficial.

To arouse public action in water conservation, the San Francisco Public Utilities Commission (SFPUC) knew it needed to whip up positive feelings. The SFPUC’s ad campaign makes saving water smart and sexy with a mix of video commercials, print ads, and social media. Praised as attention-getting and memorable, the provocative multi-lingual campaign was produced in-house for $300,000.

Whew! Is it getting hot in here or is just the sensual drought messaging?

It’s not much of a surprise that the SFPUC was willing to take a tongue-in-cheek approach to public education as a previous public education campaign about the sewage system served them well.

Closing the Lap Gap in NYC

New York City’s subways have gotten safer and are also now packed to the gills. The city’s Metropolitan Transit Authority (MTA) has put the smackdown on rude rider etiquette in its “Courtesy Counts, Manners Make a Better Ride” campaign. The series of often amusing ads, inspired by rider complaints, aim to make riding the subway less stressful for everyone.

The transit ad that got the most attention is the message to stop “manspreading“—that is, when men sit with their legs wide apart, taking up more than one seat on the subway and causing an inconvenience to other passengers.

Media and citizens have criticized the MTA’s ad campaign for costing over $75,000 while the agency is billions in debt. Others have poked fun at it for being unfair to the spread-inclined sex. It remains to be seen if a laugh can lead to seat equality.

All Signs Point to Sassy in Hayward, CA

Faced with an area of unsafe traffic, Hayward, California wanted to do more than set up additional speed traps. To start a conversation about driving and pedestrian safety, the city installed seven funny traffic signs that got people talking. With unusual messages like “Heads Up! Cross the Street. Then Update Facebook” and “35. It’s a Speed Limit Not a Suggestion” the resulting national media attention is really no shock.

City spokesman Frank Holland explained, “If [messages] don’t resonate anymore…you have to do something slightly off center so people have to pay attention. It doesn’t matter if you like it or hate it. If you see it then we’ve had a victory there.” The cost for all these chuckles and increased conversation was minimal at $205 per sign. 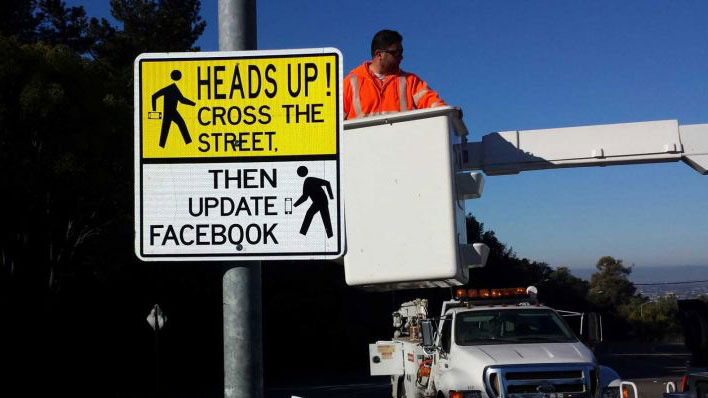 If the signs make the area safer, the city may expand the punny pilot program into other parts of the city.

Apocalyptic Ha-Has from the CDC

Here’s a classic example of using a humorous hook to raise public awareness. Part funny, part creepy, a clever campaign by the Centers for Disease Control (CDC) successfully tapped into America’s zombie zeitgeist to teach people about the importance of emergency preparedness.

The CDC used social media, e-cards, blog posts, and, in the spirit of The Walking Dead, a graphic novel to encourage healthy behaviors and communicate health messages. 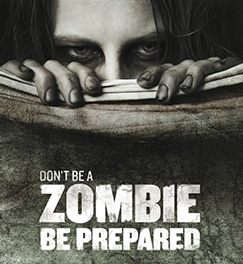 A local tourism bureau has one job: get people to visit. After snowstorms pummeled the area during the winter of 2014-2015, the Ithaca, New York and Tompkins County Convention and Visitors Bureau decided to do the opposite and suggest an alternate, warmer destination.

The website VisitIthaca.com tempted people with visions of Florida’s sun-drenched beaches and this exasperated yet funny message: 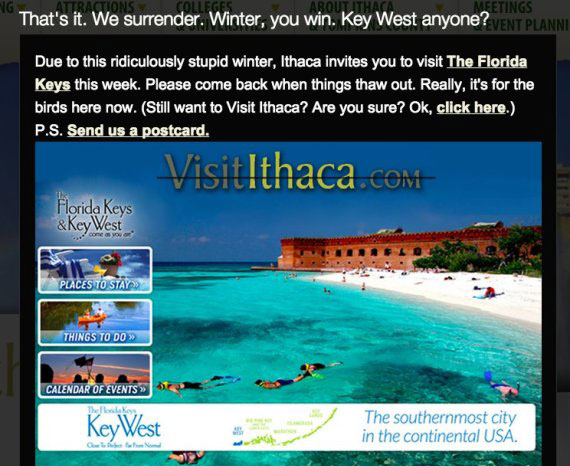 It’s said that tempers flare as temperatures rise—but when temperatures fell to 5 below in Ithaca, a sense of humor seemed the most fitting response.

Have you gotten a good laugh thanks to a public campaign lately? Share the source of your joy in the comments.