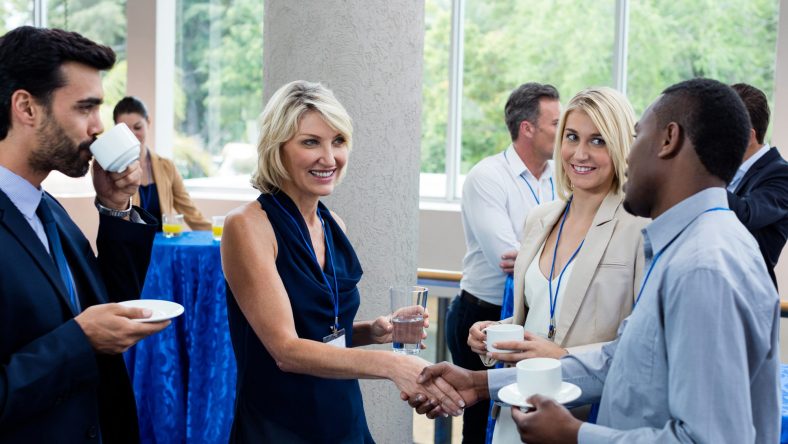 This GovLoop series on “Managing Yourself” provides readers with the right skills, tools and mindset to be proactive about their development and  thrive and succeed, both professionally and personally. Thus far, we’ve covered “Knowing Thyself,” “Goal Setting,” “Time Management,” and “Executive Presence.” Our post this week is the next step in your roadmap for success: effective networking.

What do you think of when you hear the word, “networking?” If you’re like some people, you probably conjure up images of a gigantic cocktail event full of ambitious and superficial people with overly strong handshakes and big smiles, hurriedly pushing business cards in each other’s faces. Or, maybe, you simply brush it off as a self-serving and manipulative practice that’s beneath you. If either of these perceptions jive with your own beliefs that’s fine, but you could be missing out on one of the most valuable elements of managing yourself!

Merriam-Webster defines networking as: the exchange of information or services among individuals, groups, or institutions; specifically: the cultivation of productive relationships for employment or business. So in essence, it’s neither scary nor manipulative, it’s simply taking time to build mutually beneficial relationships. The two key words are mutually beneficial.

Why Networking is Important

Peter Drucker, the philosophical founder of this GovLoop series, wrote that “managing yourself requires taking responsibility for relationships.” Why? “Because very few people work by themselves and achieve results by themselves. Most of us work with other people and are effective with other people.” This axiom for success is increasingly important the more complex and interdisciplinary our professional lives become.

Matt Ridley, a British journalist, businessman and member of Parliament, gave perhaps the best analogy on mutually beneficial relationships in his TED Talk. Here, he gives the example of two objects: one a stone scraper and the other a computer mouse. One of these objects, he outlines, is capable of being created solely by one person from start to finish. The other object, no one person in the world can make by themselves. Instead it takes a network of people via specialization and trade to create. We won’t give away which is which but you can probably surmise which object requires the network of people to create. Hint – it’s the far more powerful object!

Often we harbor a very narrow vision of what a network is and what it’s for. Typically, we think of it as strictly professional and only for new job prospects. While that’s true to some extent, it’s not the whole case nor is it the most valuable part of networking.

In 2007, Harvard Business Review published an article by Herminia Ibarra and Mark Hunter titled “How Leaders Create and Use Networks.” In it, the authors suggest there are actually three types of networks and each is used for a specific purpose.

While each of these has a specific purpose, the authors contend that truly successful people know how to form and use all three types. What’s more, they know how to leverage them together and turn personal networks into operational networks, operational into strategic and strategic into personal, etc. in order to achieve certain outcomes.

Their point is simple: In order to succeed (and advance through the ranks) in an increasingly complex and interconnected world, networking is an absolute necessity. For those who think of this as a self-serving act, the authors point out that the only other alternative is to fail!

Tips for Finding and Creating Your Own Suite of Networks

The biggest networking blunder is to wait until you need something to start making connections. Rather, we should adopt a point about communication from our article on “Executive Presence” – “we’re always on.” Networking then, once it starts, should never stop. So let’s get started.

Start conversations with people, whether it’s small talk on the elevator with co-workers or introducing yourself to someone new at the gym. The point here is to be proactive – don’t wait in isolation until someone approaches you. If you’re a little nervous, try one of these tactics:

Second – Be a Joiner

Volunteer for a committee, go with the group to lunch or play on the office sports team. These are personal favorites because they’re a two-for-one deal. You get to network while learning a new skill, completing a project, eating or playing sports. Below are real examples from the author’s life and each setting is a totally different group of people.

Our whole purpose in this series is to get you to realize your goals to get you to where you want to be. One of the best methods for navigating all the challenges in the way is to learn from the people who’ve “been there, done that.” So, when cultivating relationships, it’s important to pay attention to that.

Wrapping it All Up

No one succeeds in isolation – not to any great extent anyway. Success takes association with other people. If we desire success then, we’re required to make an effort to start connecting with the world. If we don’t, we risk being passed by.

Great piece; I loved the “been there, done that” part especially. I think it’s important to note that while everyone has a different path, we often don’t need to reinvent the wheel when it comes to career advice from those that have been in our situation once before. Yet another reason why networking is crucial!

Thank you for the three different introduces we can using to make it more fluently.