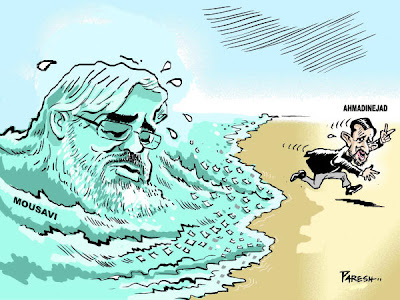 Expanding on the points made by the head of BBC News, Richard Sambrook, about the issues with sorting through the outpouring of tweets from Iran, Kevin Drum writing for Mother Jones underlines some lessons about the way in which Twitter is best used at a moment like this.

Firstly he actually quotes me, unwittingly:

One of Andrew Sullivan’s readers writes:

Ahmadinejad’s and Khamenei‘s websites were taken down yesterday — I saw the latter go down within a couple of minutes because of a DDOS attack organised via Twitter. @StopAhmadi is a good source for tweets on this. The other important use of Twitter has been distribution of proxy addresses via Twitter. This would be how most video and pictures of today’s rally have gotten out.

That was Andrew quoting from my email (but no credit). It was late GMT Sunday and @stopahmadi linked to an auto-refresh address for Khamenei’s website. Literally within a minute of his tweet the site was showing an error.
Drum cites what I’d seen happening by the middle of Sunday with Twitter:

There was just too much of it; it was nearly impossible to know who to trust; and the overwhelming surge of intensely local and intensely personal views made it far too easy to get caught up in events and see things happening that just weren’t there.

I kindof agree with Drum but as I pointed out yesterday this was if you just followed the hashtag(s) and hadn’t sifted out the best sources (like @stopamadi). I have had a big lot of new followers, I assume because I’m retweeting news and tweeting links on the situation and people have spotted this in the hashtag stream.
Looking at the past few days coverage, who Drum rates are:

The small number of traditional news outlets that do still have foreign bureaus and real expertise. The New York Times. The BBC. Al Jazeera. A few others.

The Times did have a good newsblog up by Sunday, However, on Sunday the BBC’s reporting and The Guardian‘s was terrible because, I assume, it was a Sunday and maybe because the reporters on the ground couldn’t get stories past weekend editors. It was very noticeable that the latter launched a ‘liveblog’ on Monday and the first few hours were spent with the blogger catching up.
I also watched the BBC go from ‘Amadi won’ to something a bit more nuanced and taking much more reporting from their Tehran guy and their Persian service by yesterday afternoon. Unfortunately we were still treated to the ramblings of the sort of star, flown-in reporter as seen in Drop The Dead Donkey.

Everyone appeared to be caught off guard by Tuesday’s events, including most noticeably the BBC’s star foreign reporter, John Simpson. And perhaps this was becuase they weren’t paying enough attention to Twitter where there was intense chatter about the rally, almost all about encouraging people to go. The UK MSM reporter who has impressed me the most is Channel Four’s Lindsey Hilsum.

The real star reporters has been HuffPost. Their Nico Pitney has been going with frequent updates on a liveblog since early Sunday and appears to have had little sleep.

Andy Sullivan, as well, has been open all hours and has been very good but has he repeated a lot of rumours, some posts have consisted of just a lot of tweets, and not put them in context. HuffPost has been a lot more careful and made clear what is rumour and what isn’t. Where he has been good is in linking to articles which discuss the shenanigans going on in the background as well as the reaction in American politics.

Esko’s website appears to have been taken down, so I have taken the liberty of republishing his guidance:

The purpose of this guide is to help you participate constructively in the Iranian election protests through twitter.

1. Do NOT publicise proxy IP’s over twitter, and especially not using the #iranelection hashtag. Security forces are monitoring this hashtag, and the moment they identify a proxy IP they will block it in Iran. If you are creating new proxies for the Iranian bloggers, DM them to @stopAhmadi or @iran09 and they will distributed them discretely to bloggers in Iran.
2. Hashtags, the only two legitimate hashtags being used by bloggers in Iran are #iranelection and #gr88, other hashtag ideas run the risk of diluting the conversation.
3. Keep you bull$hit filter up! Security forces are now setting up twitter accounts to spread disinformation by posing as Iranian protesters. Please don’t retweet impetuosly, try to confirm information with reliable sources before retweeting. The legitimate sources are not hard to find and follow.
4. Help cover the bloggers: change your twitter settings so that your location is TEHRAN and your time zone is GMT +3.30. Security forces are hunting for bloggers using location and timezone searches. If we all become ‘Iranians’ it becomes much harder to find them.
5. Don’t blow their cover! If you discover a genuine source, please don’t publicise their name or location on a website. These bloggers are in REAL danger. Spread the word discretely through your own networks but don’t signpost them to the security forces. People are dying there, for real, please keep that in mind.
6. Denial of Service attacks. If you don’t know what you are doing, stay out of this game. Only target those sites the legitimate Iranian bloggers are designating. Be aware that these attacks can have detrimental effects to the network the protesters are relying on. Keep monitoring their traffic to note when you should turn the taps on or off.
7. Do spread the (legitimate) word, it works! When the bloggers asked for twitter maintenance to be postponed using the #nomaintenance tag, it had the desired effect. As long as we spread good information, provide moral support to the protesters, and take our lead from the legitimate bloggers, we can make a constructive contribution.

Please remember that this is about the future of the Iranian people, while it might be exciting to get caught up in the flow of participating in a new meme, do not lose sight of what this is really about.

Rachel Maddow discusses the use of the web by the opposition with NBC correspondent Richard Engel. Importantly, Engel notes the use of Twitter as an organisational tool.

Visit msnbc.com for Breaking News, World News, and News about the Economy

The government wants change. Will they bring in the right cultural experts to make it happen?