Having visited the project management envelope, the enterprise architecture envelope, the user experience envelope and the collaborative development envelope, we turn now to the election events of the last couple weeks and how they impact the four envelopes and federal IT in general — at least how we hope they could make an impact.

Presidential appointees tend to leave as administrations end. It’s a normal occurrence both when administrations are of different parties and even when second terms begin; it’s just a natural breaking point. If that were only the case with the federal chief information officers’ office, it would be good news. But it’s not.

Let’s say the office of the Chief Federal Enterprise Architect has been vacant for many months and even the CIO position itself is vacant as well. Nobody’s keeping the lights on much less leading the information technology of the federal government.

Hopefully, a new administration will fill not only the presidentially appointed positions, but the senior non-career, career and senior executive positions now vacant in the Office of E-Government and Information Technology within the Office of Management and Budget. This would at least put a team in place that might revitalize federal IT initiatives instead of just promulgating instructions for how to count the technology “beans” with acquisition-related documents that are devoid of actual policy guidance related to IT — except IT that federal tax dollars are being spent on.

Staffing issues aside, no number of actual appointments and personnel moves will reinvigorate the E-Gov office if it keeps its current structure. Hopefully, this too could be changed with the new administration’s assuming office in January. The existing structure has two deputies and even that is a recent change brought about by the creation of the U.S. Digital Service in August 2014. 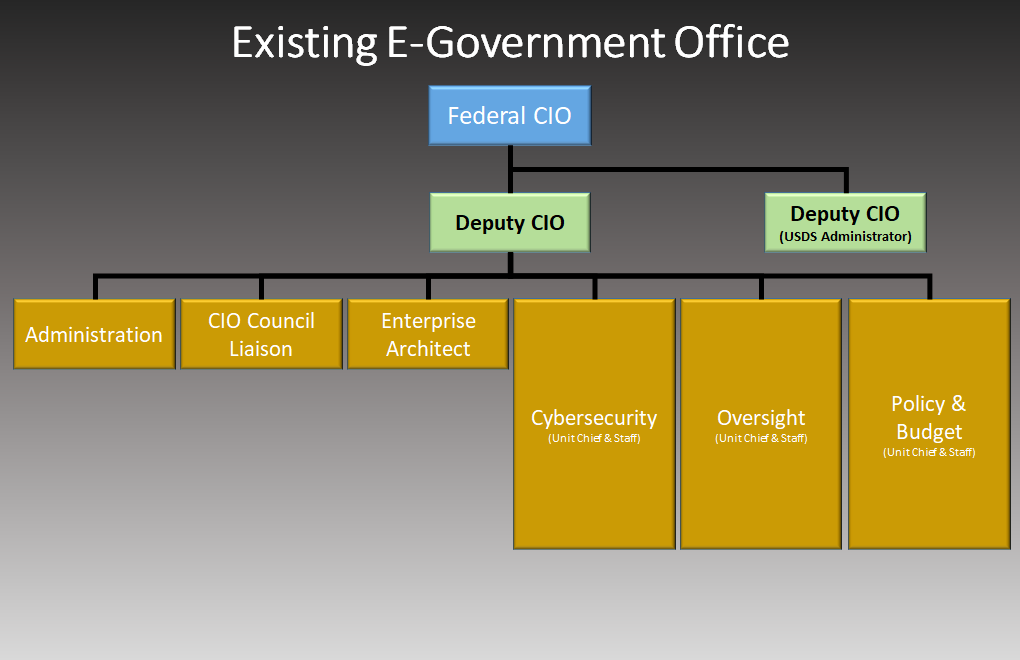 The current organization chart of the Office of E-Government and Information Technology in the Office of Management and Budget within the Executive Office of the President.

The principal deputy role is a placeholder to keep the lights on when the CIO’s position is vacant, as it is doing today. There is no staff associated with the Chief Federal Enterprise Architect position while three of the units have unit chiefs of staff for cybersecurity, oversight (which is where the departments have “desk officers”), and the policy and budget unit.

So how do the four envelopes we’ve explored over the past months relate to the structure of the E-Gov office? Hopefully, each of the envelopes will find a new home within a modified structure. Instead of two subordinates, the structure proposed below shows how four deputies would report to the CIO: one each for policy and administration; enterprise architecture; portfolio, program and project management; and the already existing USDS administrator. 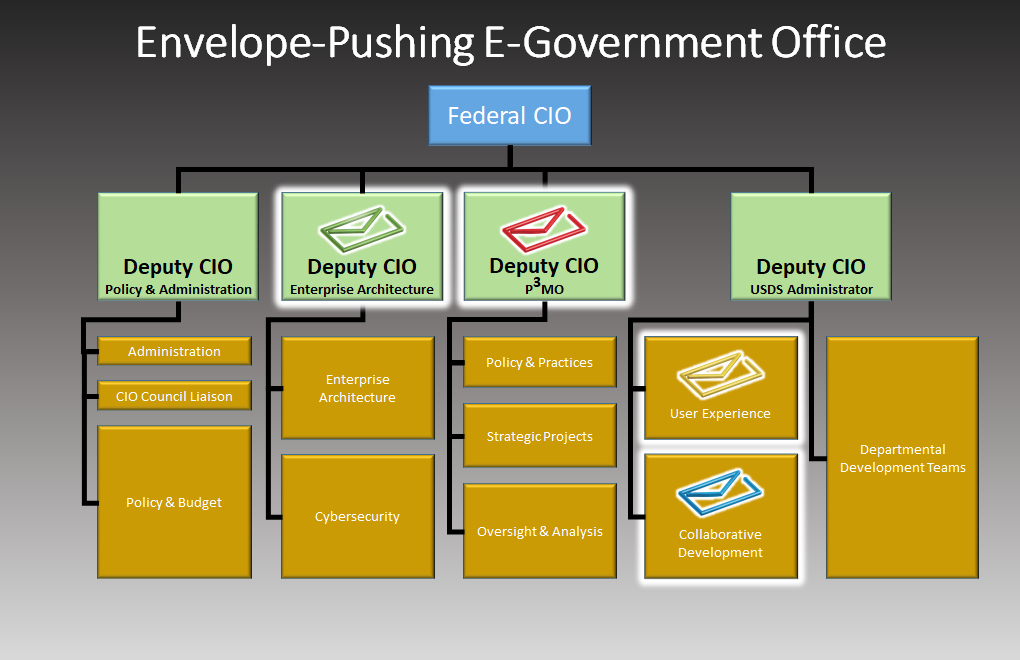 The heart of the revitalized Office of E-Government and Information Technology is a redistributed focus on the various facets and the new envelope responsibilities.

Two of the envelopes are distributed to the deputies that “own” those topics: the enterprise architecture envelope and the project management envelope within the portfolio, program and project management office. Cybersecurity is moved to EA as a function of building-it-in as opposed to strapping-it-on to such architectures. The previous Chief Federal Enterprise Architect, Dr. Scott Bernard, teaches a graduate cybersecurity course for Syracuse University that focuses on an EA approach to ensuring security — a pattern that should be adopted by the federal government with this aggregation within the EA envelope. I was honored to be a guest instructor for that course a couple of years ago and can attest to the strength of that approach.

The policy and practices unit within the P3MO is focused only on the project management aspects of the federal IT portfolio, not the policy and budget functions within the unit under the Deputy CIO for Policy & Administration so there isn’t any stepping on toes. The existing agency desks would move the to the P3MO as a function of portfolio management while the strategic projects unit will be discussed below.

The remaining two envelopes are embedded within the USDS: the user experience envelope and the collaborative development envelope. This is where those two envelopes were created, and they are a critical part of regaining USDS momentum as the leading edge of federal IT. What the envelopes add is the distributed engagement made possible by sharing the two envelopes with the public. By such sharing, the USDS would seek external engagement and public improvements to their already first-class approaches, improving the relationship of federal IT with the public through transparency, hopefully.

Pushing the collaborative development envelope would hopefully be the leading edge of federal development code and a forerunner of the kind of time and material incentive fee approach discussed in the Collaborative Development envelope blog.  While the incentive fee would be problematic absent changes to the Federal Acquisition Regulations, it could begin to introduce and validate the approach, further renewing and cementing USDS’s role as the leading edge of federal IT.

From Tactical to Strategic

Beyond the structural and process improvements is the key issue of tactical versus strategic information technology transformation. I have encapsulated this transition in the Strategic Projects unit within the P3MO office. The federal IT establishment has never been viewed as a strategic interest, merely tactical aspects of other, actually strategic programs or projects. The most perfect example I can recall is the healthcare.gov failure. It was viewed merely as a tactical aspect of implementing the Affordable Care Act (a.k.a Obamacare). The technology team was left to work it out themselves without the meaningful cohesive engagement of the policy team and the inter-agency coordination that was so desperately missing leading up to the initial launch of the site.

The original USDS team was blessed with the personal relationship between the USDS administrator and the president: more of a t-shirt than a coat-and-tie relationship. While that personal relationship is impossible to recreate, a strategic focus on federal IT could at least elevate it beyond the layer-upon-layer down within the OMB structure the Office of E-Government and IT currently occupies. Hopefully, elevating the entire office within that structure is desperately needed to make the envelopes possible.

Summing up and Moving on…

This blog issue has been focused on a “new hope“: that this change in administration can embody both the ideals and implementations of the four envelopes as a part of revitalization and renewal within the nascent OMB Office of E-Government and Information Technology.

Next up, we’ll take a few looks at how a reinvigorated E-Gov office and USDS can surface their newly aligned envelopes to everyone’s advantage.

A Millennial’s Perspective on Modernizing