Everybody has been scrambling to make sense of Trump’ budget blueprint released earlier this week. Whether you think Trump’s budget proposal would gut government services or put America first, it signals significant changes ahead for federal workers and also for people working at state and local agencies, community organizations, and partners, and for the general public.

To help you understand where the federal budget stands, we’ve answered some of the questions you might have about Trump’s budget proposal. There’s more information than can be included here. Be sure to check out the linked sources for more information.

First, what is the budget process?

If Trump’s budget proposal has you and your colleagues worried, take some comfort: The budget request is far from the final word. It’s more of an outline of Trump’s priorities, and is not binding.

In 2015, National Priorities Project shared a high-level summary of the federal budget process:

In practice, setting the federal budget is a complex (some might say messy), contentious (some might say partisan), and difficult (some might say dysfunctional) process involving the president, Cabinet, White House staff, the Office of Management and Budget (OMB), the Congressional Budget Office (CBO), the House, the Senate, a conference committee, two Budget Committees, two Appropriations Committees, 24 appropriations subcommittees, and almost all federal agencies.

The process of setting the federal budget kicks off with the president’s budget proposal, usually released in February (Trump released his on March 16). It ends when the president signs the final budget bills, ideally but rarely by the start of the fiscal year on October 1. The larger budget cycle, from formulation through audit, lasts four years.

What does Trump’s budget proposal say?

Trump’s $1.15 trillion budget blueprint is also known as a “skinny budget” because it is just a portion of his later full budget request. Unusually, Trump’s request only addresses discretionary spending, which accounts for less than one third of all federal spending. Trump’s budget is otherwise not skinny, since it does not reduce the overall budget for discretionary spending and wouldn’t reduce the deficit.

The budget proposal calls for steep cuts to non-defense discretionary (NDD) programs. It would eliminate 19 independent agencies and shrink the budget of almost all other agencies, some drastically. The largest cut would drop the Environmental Protection Agency (EPA)’s budget by 31%, eliminating 50 programs and 3,200 jobs. Trump also proposes funding cuts to at least 61 programs. The public outcry has been loud especially about potential cuts to programs affecting climate change, meals for homebound seniors and veterans, after-school and summer school programs, libraries, farmers and rural communities, science and research, arts and humanities, diplomatic and foreign aid, and much more.

Trump’s budget proposal increases the budget at only a few agencies. It would raise defense spending by $54 billion, with the bulk going to the Department of Defense. However, as Vox and and Breaking Defense explain, the actual defense increase is more like $18 billion. The Hill reported that the budget’s defense proposal has displeased both hawks and watchdogs. The proposal would also boost the Department of Homeland Security‘s budget, the majority for $2.6 billion toward the estimated $22 billion it will cost the U.S. to build the border wall. Other proposed increases include Veterans Affairs, the Department of Energy’s National Nuclear Security Administration, and charter schools and school vouchers.

Trump’s proposal is far from a full budget. It’s also revealing to look at what isn’t included. It does not include mandatory spending such as Medicare, Medicare, and Social Security. It does not include revenue, so there’s no clarity yet about Trump’s tax policy. The nonpartisan Center on Budget and Policy Priorities has a detailed analysis of how much is missing from Trump’s blueprint compared to past presidents’ budgets. 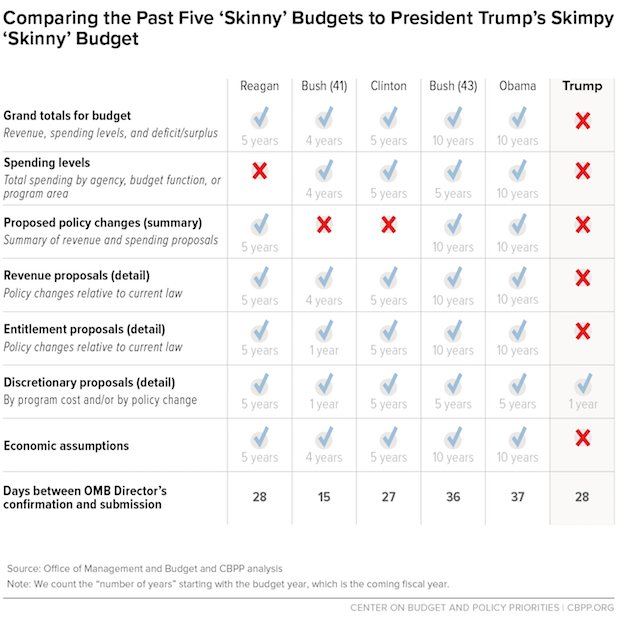 What would Trump’s budget do to the government workforce?

Trump’s budget blueprint does not specify the total number of government jobs to eliminate to pay for the spending cuts. However, his past comments about reducing the federal workforce combined with this budget proposal raises the likelihood of a massive reduction in force.

The expert also estimates a 1.8% job loss the Washington D.C. area, where struggling employment growth already has economists worried. Home values and average incomes in the area could also drop. The Washingtonian states the layoffs in D.C. “would ripple through the rest of the local economy.” NBC Washington reported that federal workers in D.C. are “anxious about their futures.”

There are no estimates yet on the budget blueprint’s possible impact on employment at state and local agencies, community organizations, partners, or others that receive federal grants or other support, or on anyone else who might be affected by changes in federal spending, employment, and priorities.

What does Trump’s budget proposal mean?

Media outlets, think tanks, and organizations have been quick to analyze Trump’s budget request. Some evaluated at the overall picture, while others focused on a particular issue, affected community, or agency.

The Washington Post reported that Trump’s budget proposal “calls for a startling downsizing of agencies that historically have received steady bipartisan support.” The New York Times called it “a brash upending of the government’s priorities.” In an opinion piece for Newsweek, professor of political science Roy T. Meyers decreed Trump’s budget proposal “dead before arrival.” USA Today interviewed former Republican budget officials who characterized the budget as a “betrayal” of poor, rural Americans and of Trump’s populist message. Fortune said it “could make the already daunting trajectory for U.S.’s soaring debt far more perilous.” An analysis by the Las Vegas Review-Journal, one of the few newspapers to endorse Trump for president, merely called the budget proposal “radically different” and said it “delivers on campaign promises.”

Journalist Dan Rather described Trump’s budget proposal as “a philosophy, and one that may come as a surprise to many of the people who voted for Mr. Trump.” The White House’s budget head Mick Mulvaney told MSNBC’s “Morning Joe” that “folks who voted for the president are getting exactly what they voted for.” While Mulvaney’s statement seems meant as a reassurance of campaign promises fulfilled, some people may not have anticipated the extent of the cuts Trump would like to make to government.

Since the goal of cutting programs is to give them to the individual States to oversee maybe they could give preference to Federal employees affected to the new jobs created at the States. There must be some way to cut spending of our hard earned tax dollars.

Women’s History Month: She Made the U.S. Senate “A Place Where Women Belong”