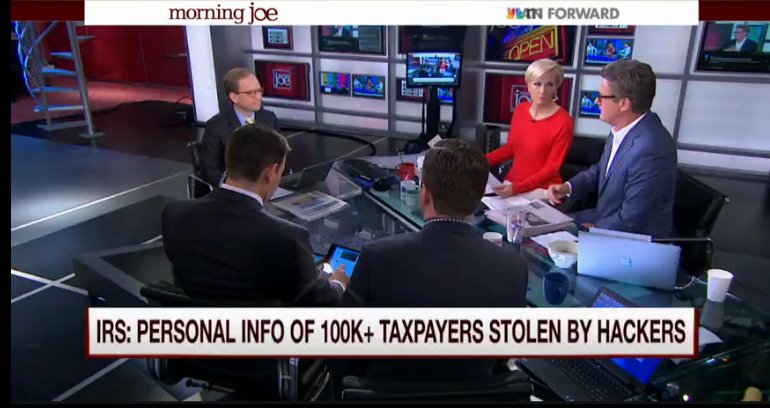 Why do government systems fail?

That is essentially the question raised by MSNBC Morning Joe host Joe Scarborough following word that IRS data got hacked.

The short but exceedingly provocative discussion that followed spurred me to think: How would I answer that question? What are the big obstacles to success of government systems?

Scarborough asked why “our federal government seems to be stuck in the 1980s when it comes to IT… it’s not just HealthCare.gov but so many other attempts to bring the government into the 21st century … We have Silicon Valley — this is one thing that we are on the cutting edge across the world.”

“It’s a mix of things,” Rattner said. “The government is the government. It doesn’t operate like the private sector.”

Scarborough balked at the  riff on budget cutting. (I argue below that the situation is much more complex than the partisan crib notes — fund vs cut — make it out.)

To start, I don’t fully buy the premise that failure is unique to government. The fact is big systems are complicated — and the size of government systems make them particularly complex.

Furthermore I don’t believe there are more failures in the government than in the private sector. Mirroring the IRS case, there have been hacks of private sector systems — we all remember Target… Sony… Home Depot or one of a score of health insurers or American Airline’s reservation system didn’t spur questions about why the private sector can handle IT projects. Again, these systems are difficult.

But it seems to me that part of the Morning Joe discussion was preposterous and yet accurately represents beliefs that many people have of the problems facing government. Again, the discussion was short so they didn’t go into it in great detail. But I am a bit baffled by Rattner’s suggestion that  government doesn’t have enough accountability. To me, it is the contrary. The problem isn’t a lack of accountability. It is that there is so much accountability that then leads to no accountability. In most cases, there is so much oversight that it actually becomes an impediment to getting the job done — and some of that oversight is often less than helpful and only comes after the fact and is more about grandstanding than true oversight.

Furthermore the layers of oversight have spurred a culture that is so risk adverse that government keeps doing the same thing over and over again whole expecting different results. In fact the oversight needs to be focused and effective.

Furthermore Rattner suggestion that Feds simply can’t manage also just seems off target. To the contrary — given the situation and circumstances under which we expect these highly complex programs to be managed, I think government managers are some of the best in the world. (Imagine a private sector organization where you may or may not get your funding until anywhere from three- to six-months into the year… and, by the way, you have to spend it by the end of that fiscal year… and then there are all kinds of odd entanglements that are connected to that spending by lawmakers who are looking to protect their own turf… and, by the way, in the midst of all that, we may just shut the organization down for awhile. Again, the argument that government managers can’t manage seems specious. To the contrary, they’ve managed spectacularly well. Unfortunately they have had to get exceptionally good at managing chaos that is outside of their control.) 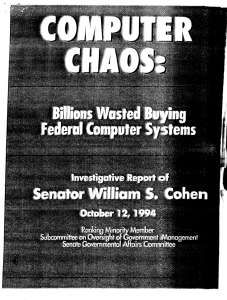 Some of the best insights are 20 years old — a October 1994 report done by then Sen. William Cohen (R-Maine) titled Computer Chaos: Billions Wasted Buying Federal Computer Systems. [PDF — and a bad PDF at that… An aside: Some of the authors of that report, Paul Brubaker   and William Greenwalt have written about it more recently, although they pretty much say that the 20-year-old report got it mostly correct… We just haven’t really done much about it.]

If somebody were to ask me about the problems facing government IT, here is my list:

So this is the whiny and somewhat defensive list — most of the items on this list feds can’t do anything about… they are above their pay grade. But they are some of the biggest hurdles to effective management. We should probably also make a list that includes what people can do — today — to help the situation.

Mr. Dorobek, you’ve hit most of this right on the head. Accountability, both the lack of it and too much of it, does not allow for the artistry it takes to create for the purpose of serving the public. It is as if Michaelangelo had a committee challenging every brush stroke. But more so, the reason for the accountability and the reason for the coding clash. The IT department has only to create for the service. The people who form committees and oversee what should be serviceable products have budget reductions and restrictions in mind.

Quality, speed and cheap. Pick two, because you can’t have it all. Government today only wants speed and reduced costs and to have it yesterday. Quality goes out the door. Accountability toward building service worthy systems go out the door. Nevertheless, those who say they have accountability are happy because they got two of the three items, and that is what they are held accountable for. Meanwhile, in IT, the quality level shows up on Morning Joe in the form of questions about why government fails.

We should return to the days when the government man (G Men) meant something. Quality and responsibility toward making the country better was the credo. Instead, we have accountability regarding lowing budgets and getting it out based upon time limits set by election promises.

Let’s hope FITARA helps by making CIOs more accountable for all IT programs and acquisitions. CIOs need education and training to successfully implement this new mandate, so they can start to reduce some of the fraud, waste and abuse happening every day in Government. CIOs, CFOs, EA, Acquisition, and PM professionals should attend Outcome Driven Government’s FITARA Implementation Symposium on 6/30 to learn how to successfully implement FITARA with an outcome driven and agile approach. Register at http://www.afei.org

Cybersecurity and the Missing Workforce

Saving Soldiers: Health in the Military