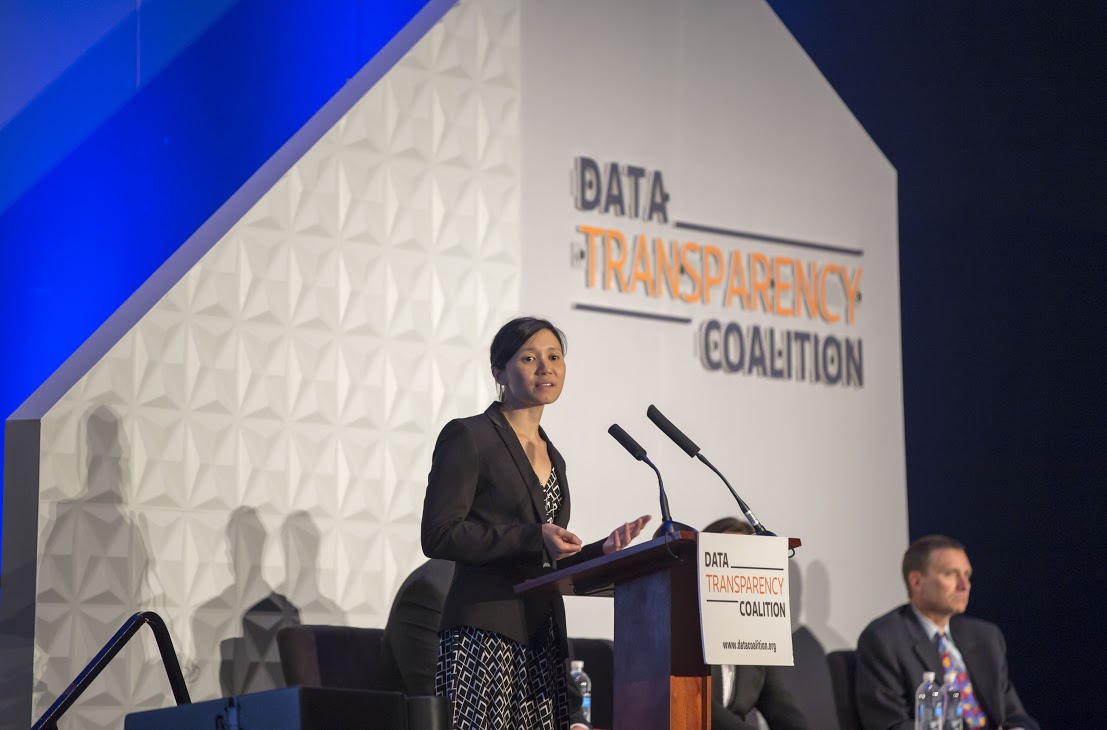 Tracking federal spending is not for the faint of heart.

For starters, the system doesn’t cater to curious citizens or concerned feds, who want to track spending from appropriations in Congress to contract and grant awards.

Part of the problem is different agencies use different systems to compile data, and there isn’t a consistent way for reporting that data governmentwide. It doesn’t help that government is lacking a single website for the public to view complete and accurate contract spending data, grants, loans and other financial assistance awards. USAspending.gov was an early attempt to provide those details, but government watchdog reports found that “few awards on the website contained information that was fully consistent with agency records.”

So what’s the government doing to fix these problems?

The graphic below from the Data Transparency Coalition provides a great visual of the issues I described. The yellow tab marked data standards sums up the direction the government is heading, thanks to the Digital Accountability and Transparency (DATA) Act. 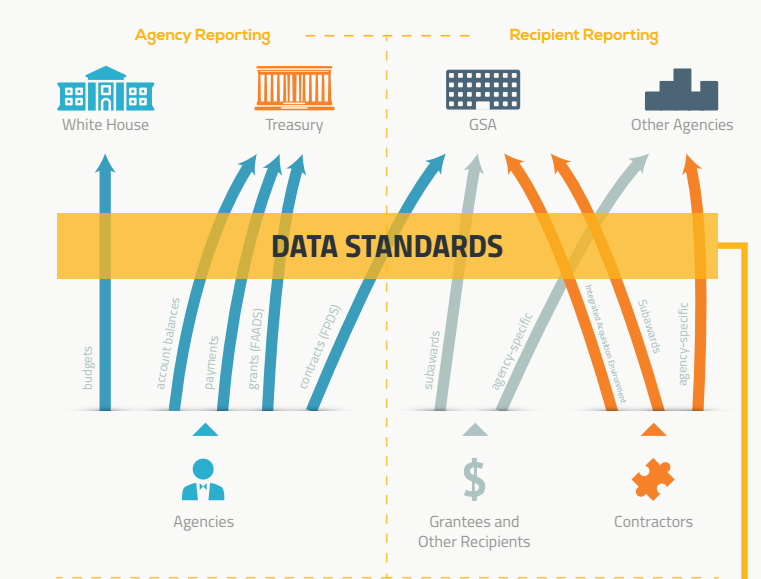 “The data standards and the policies that we are pursuing now are really part of an infrastructure,” said Karen Lee, Branch Chief for the Office of Management and Budget’s Office of Federal Financial Management. Speaking at the DATA Act Summit in Washington, D.C. on Wednesday, Lee laid out the current problems and solutions defined by the new law.

“The way I like to think of where we are now, we are in a UN meeting where we don’t have the headphones yet to speak to each other in a way that is efficient and effective,” Lee said. Instead, there are multiple translators helping people to communicate. The DATA Act is setting the infrastructure for the headphones, and it represents a huge management and culture change.

“Change in culture is critical to the implementation of the DATA act,” Iannotta said during the summit. She summed up some of the reasons why agencies are hesitant to share their data with others — let alone have it published for everyone to freely peruse:

“These are cultural beliefs and disincentives for us to share data with one another,” Iannotta said, adding that agencies must find ways to affect cultural change.

One way is explaining to employees what the DATA Act is all about, how it will affect them and why it matters. Chris Mihm, Managing Director of Strategic Issues at GAO explained a few of those benefits:

Lee also noted that this new way of using data could replace or simplify current data-related tasks. That should be welcoming news for employees who will have a hand in implementing the DATA Act, including workers who support chief financial, acquisition and information officers.

Last May, President Obama signed the DATA Act into law, which set specific milestones over a one to four-year period for reporting and publishing spending data. The Treasury Department and OMB are taking the lead to set a reporting standard for federal data. The General Services Administration’s 18F Consulting group is teaming with Treasury to lead outreach efforts and collaborate with vendors. You’ll appreciate this summary from 18F about what the DATA Act means for agencies:

“A simple way to think of this common data standard (though it’s much more nuanced) is a list of spending information that agencies must track each time they award money. The list will include awards-level information (specifics about the program or project being funded, who and where the money is going to, etc.) as well as information about the Treasury account that the award was paid out of.

Agencies have all of this information, but it usually lives in several different systems. The DATA Act requires them to pull it all into a single format (i.e., the federal spending data standard) and periodically submit it to Treasury. This will be hard work. But once the DATA Act is implemented, there will be one single place that houses information about the broader spending lifecycle for the entire federal government. This single place will be USASpending.gov (or a replacement website).”

For OMB and Treasury, next steps include finalizing all data standards by the end of the summer, reviewing agencies’ plans for implementing those standards, conducting agency workshops and completing a pilot program to test the potential benefits of requiring grantees and contractors to adhere to the new data reporting standards.

[…] there also are a couple of things government needs to be cautious of and vigilant to do. While the Digital Transparency and Accountability (DATA) Act is a great framework that sets standards for reporting federal financial data, it is a first step […]

This is a great momentum, that I have ever met.

Beating Cybercriminals at Their Own Game

Tips, Tricks, and Tools for Becoming a Better Writer