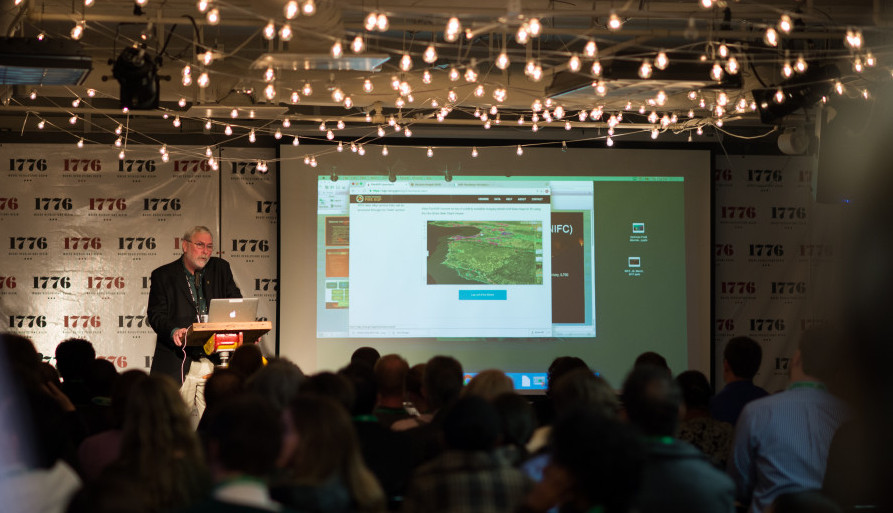 Many government organizations conduct field operations. Whether it is a scientist validating remotely sensed data or a National Guardsmen performing damage assessment after a hurricane, field operations staff are crucial.

At our recent MapUp, Optimize Field Operations with GIS, we learned how geographic information systems (GIS) can empower those personnel to optimize their field operations. At the event, we heard from:

McIntosh kicked off the night by describing a night in 2008 when Virginia was accosted by more than 300 wildfires. It was the night McIntosh was introduced to GIS, but not the GIS we know today. He recounted a night – that turned into days and weeks – of firefighters and other first responders manually culling through static maps, trying to keep up with real-time occurrences with outdated data.

First responders understood the importance of location to quelling these natural disasters, but they simply didn’t have the right mapping tools to do it. As a result, multiple lives were lost and, as McIntosh said, “They just weren’t capable of staying ahead of those fires.”

Less than ten years later, McIntosh and others have learned how more effective GIS could have drastically altered that scenario. Esri’s ArcGIS, a platform that automatically collects, manages and published interactive geo-enabled data, is enabling first responders and other field operations staff to effectively do their jobs.

By consuming real-time data, incorporating it into maps, and letting you consume it with adaptable applications, GIS is becoming a crucial tool for all field operations works. To better understand how, we heard three stories that prove the power of the new, better GIS:

For about 15 years, NOAA has been researching coral reefs to understand and analyze a wide variety of variables, including fish populations, climate change impacts, socio-economic conditions of nearby inhabitants, and water depths. Until now, employees executed these large-sale, large participant underwater sampling efforts using a number of hard-copy spreadsheets, maps, and tables to record collected data. A field coordinator then used these multiple resources to identify new sites, assign boats, and execute new research. As new data was created, it had to manually input overnight to inform the next day’s research endeavors.

That inefficient methodology is about to change, however. Now, NOAA is using a combination of tools from ArcGIS to automate and accelerate the way coral reefs are studied. A Web AppBuilder site, along with Collector apps on the boats, will streamline the planning and coordination of the fieldwork. Field coordinators now have a wealth of up-to-date data, including information not previously tracked in static maps, to plan their decisions of surveillance in real-time. Additionally, with Esri’s Dashboard app, managers call also more accurately oversee progress on the project.

Eutsler’s team at the DC Urban Forestry Administration is already using mobile GIS systems to optimize operations. How? “We’re able to constantly operate in real time, communicating with field crews as they do work, and just being exceptionally informed about what’s happening,” said Eutsler.

With mobile GIS solutions, the DC team is able to quickly react to requests for tree inspections, downfalls, removals or other issues because their local, interactive maps are immediately updated when requests are created. What’s more, those requests can be made (and seen) by both field staff and citizens so everyone knows the status of DC’s trees and the department’s operations.

With GIS, DC has been able to keep DC green, while making city operations more effective. In fact, using these tools they respond to over 13,000 resident requests every year, inspecting more than 300 trees in the DC-area each day. “Mobile GIS helps us improve our efficiency, transparency and effectiveness,” Eutsler said.

The National Interagency Fire Center (NIFC) is the organization that coordinates wildfire management nationwide. It coordinates six primary federal agencies, as well as DoD, FEMA, and others. Today, NIFC can handle a staggering 50 major incidents simultaneously, which Steffenson said they are increasingly called upon to do. They also responds to other natural disasters, including hurricanes and earthquakes. GIS enables NIFC to do that.

Specifically, their Fire Enterprise Geospatial Portal – powered by ArcGIS – provides geo-spatial data and capabilities between all existing fire applications so that NIFC can respond quickly and effectively to disasters. First responders have an accurate picture of on-the-ground scenarios, while offsite coordinators can direct field operations with all the information they needs. There’s also a public-facing components of the portal that keeps citizens, leaders and the press up-to-date with current response efforts.

As the examples show, GIS has the power to transform the way government field operations are executed. It helps keep us safer, while making agencies more efficient and effective.