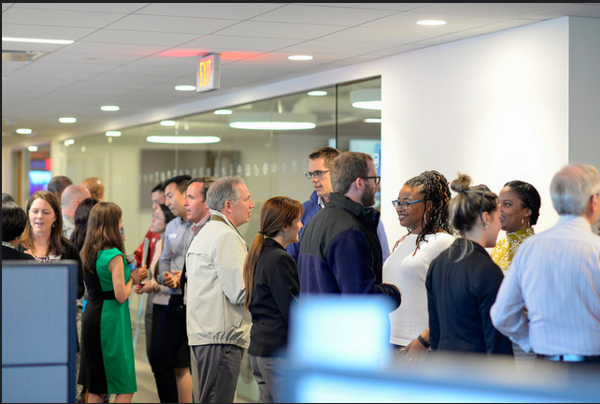 There is arguably no more important skill for government career growth than networking. And doing it well can be the difference between landing a promotion or big project and being stuck in place. But it’s scary, and can be daunting to feel like you’re doing it well. So how do you advance? The key, we learned at a recent GovLoop event, is to approach networking as a way to help others, not just yourself.

At GovLoop’s recent NextGen Workshop, How to Network to Boost Your Career, we heard from Dave Uejio, Acting Chief Strategy Officer at Consumer Financial Protection Bureau. Uejio did a quick over of why networking is important and how to network from the “light side.”

What is the light side of networking? “Use networking to serve one another, not to optimize for yourself,” said Uejio. Networking shouldn’t start because you need it or you are trying to find ways to use others, he explained. “You should network from a place of service.”

What’s that mean? In short, when you are networking, you shouldn’t look at it like a short-term relationship. Try to make it a lasting and durable connection that serves everybody involved.

Uejio gave three tips to put the concept of networking from the light side into practice.

Be a great host. Think about networking like you are hosting a party at your house. “This is a way to make networking better for you and everyone else,” said Uejio. When you think of networking like being a host, it’s not a threatening, awkward social gathering – it’s a place where you are comfortable.

Ask compelling questions. “Questions are your best friend because every time you ask a question, it opens another door to talk about things,” said Uejio. The goal of networking is not to impress other people. It’s about getting to know others and making lasting relationships. By asking questions, you get to know a little more about them and make a connection.

Win the follow up. Following up with someone can make all the difference. After you go home from a networking event with a handful of business cards, don’t just set them aside and forget about them. Remember the people you talked to and send them a quick email. All it has to say is “Hey, it was nice to meet you and I enjoyed our discussion about _______.” Sweet and simple. “This makes it easier to build connections with people,” said Uejio.

After Uejio’s presentation everyone had the chance to participate in a speed networking exercise of talking to 10 people for two minutes each. People got the opportunity to practice networking from the light side and put these tips into practice.

This workshop was a sneak preview into GovLoop’s annual NextGen Summit that provides training and leadership opportunities to people new to government. For more information please visit https://www.nextgengovt.com/.

This was a great event. Glad that I went. I did indeed network with others, make connections and strengthen existing relationships. I highly recommend that those who can be sure to make the next event.

So glad to hear you had such a wonderful time! Thanks for letting us know 🙂

5 LinkedIn Groups Every Millennial Should Join

Is There a Federal Formula for Innovation?