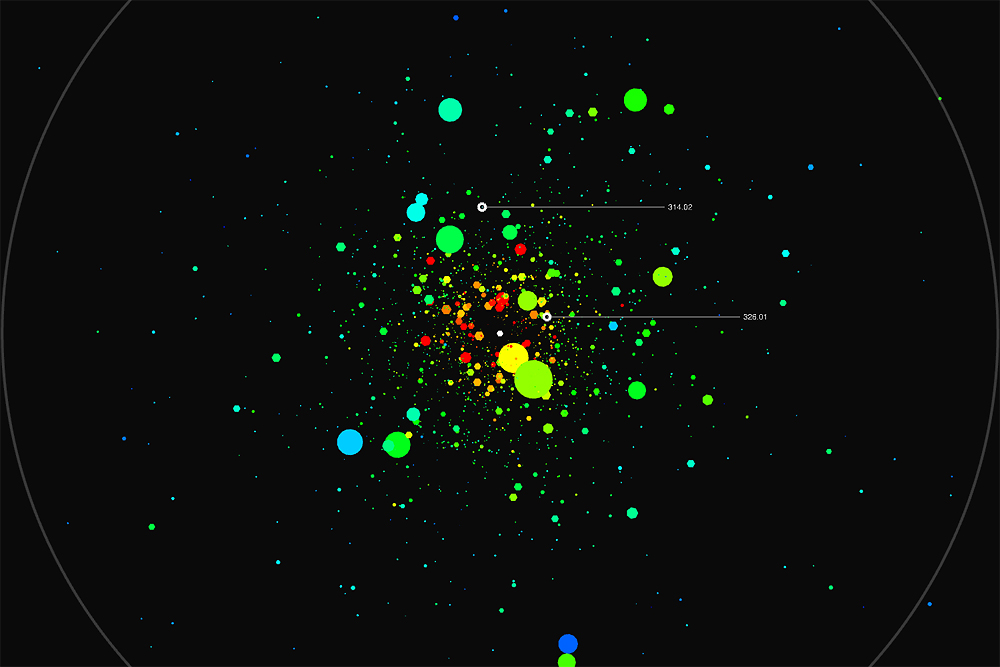 Jer Thorp is a data artist. He literally breathes life into data, by creating interactive visualizations of immense data sets.

At today’s GovDelivery 8th Annual Federal Federal Communications Summit, he introduced what he calls the Ohh/Aah Principle. This idea guides how he presents data and, after today, it should guide the way your present data too.

Here’s the idea: Every time you show someone data, your presentation should do two things. It should capture the attention of people who wouldn’t normally be interested in the subject matter (that’s when you’d say Ohh! Look at that!). Then, it should teach you something (that’s when you have an Ahh! moment).

The Kepler telescope, operated by NASA, is in the business of identifying planets. It does this by measuring the light emitted by stars over time. A 1/10,000 decrease in light, repeated over time, signals a transit. That is, it shows the orbital path of a planet has crossed the star and temporarily blocked the light passing to earth.

Well the NASA papers that announced all these findings weren’t so impressive. In fact, it was basically a snooze-fest–pages upon pages of black and white graphs and numbers. As Thorp said, “It was graphs for astronomers, in the language of astronomers.”

But this was exciting stuff that could really be used to engage the public in NASA’s work. So Thorp took another crack at the Kepler data, and created the visualization below.

Take a look at the video. I bet you will both oh! and ah! The multiple charts and graphs that detailed Kepler’s discoveries were boiled down into two colorful, exciting visualizations. In one, all of the discovered planets orbit our sun, in order to show the distance, density, and size of each planet, relative to our own solar system. The second graph shows the same information on an X/Y axis.

Already, Thorp has made the data way more exciting. What’s more, the two seamlessly transition so that the average viewer can understand how the two data sets are related. Now, all that data makes sense. Oh yea, and both visualizations can be controlled by a user’s gestures, just like in the movie, Minority Report. No big deal.

Right about now, you’re probably thinking, “Ok, that is super cool, but what’s that got to do with me and my data? No way can I make that sort of crazy visualization.”

Well, maybe you can’t. But, it doesn’t take remote gesturing or swirly cyber-planets to stick to Thorp’s Ohh/Aah principle. It just takes a little creativity to think about how you can draw in your audience (oh!) and teach them something about what you do (ah!).

So, next time you show off your agency’s work with data, ask yourself if there’s a better way to make your achievements more exciting and relatable. As Thorp asserted, “It’s not your data that’s important. It’s what you do with it.”

Loved hearing him speak – and your article – a great visualization of otherwise ‘normal’ data. Thanks for sharing!

The Data Goldmine for Federal Government