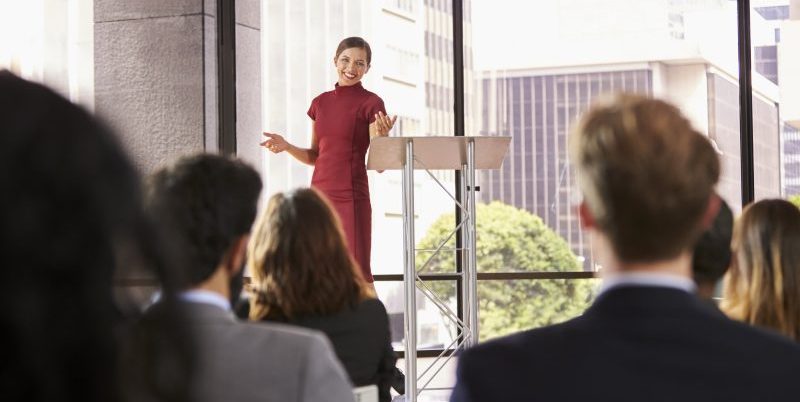 Just about all of us have been here before: You’re scheduled to get up in front of an audience, and the mere thought of it jolts your heart into overdrive. Maybe you know the topic like the back of your hand, but that doesn’t matter because you’re finding it difficult to say anything at all.

On the spectrum of reactions to public speaking, only about a small percentage of us actually loves it. The heavy majority, while not entirely debilitated by a phobia, feels some adrenaline-induced anxiety. But what if we could control those butterflies, or even use them to our advantage?

That was the topic of conversation at GovLoop’s recent online training, aptly titled “Public Speaking Tips and Tricks.” Emily Jarvis, Online and Events Editor at GovLoop, moderated the session alongside Sandy Day, Spokesman at the Office of Personnel Management, and Kristin McNally, Director of the Office of Employee Engagement at the Labor Department.

Each of the three speakers presented the audience with a set of tips and tricks to improve public speaking skills. Day took the floor first with five common mistakes to avoid.

When talking to a crowd:

1. Avoid focusing on one particular person who makes you feel comfortable.

Day said he makes sure he can move on stage. If possible, he’ll ask for a mobile microphone to help facilitate this.

“Your audience is looking at you as the subject matter expert, and they want you to make them feel comfortable,” he said. “Once they feel you, they will be more engaging with you.”

2. Avoid reading from a script or PowerPoint presentation.

A PowerPoint slide should be treated as a teaser, he said. Reading directly from a script or presentation diminishes your credibility as the main source of knowledge.

3. Avoid speaking in a monotone.

You probably already know the benefits of presenting with high energy, but it’s worth noting again that audience members will have a significantly tougher time keeping engaged with dry intonations. You should be passionate about the subject matter, and you should let that passion shine through.

Most audience members can tell when a speaker isn’t prepared, and you don’t want that to be the first impression you make.

As an example, Day explained that he prepared for the online training by printing out his presentation, just in case technical difficulties on his end derailed the speech as planned.

It should go without saying that people deserve respect and courtesy. On top of that, people tend to remember those who are consistently professional around them. That can lead to referrals and helpful industry connections.

Jarvis was next up to give her six biggest steps to a successful presentation.

Jarvis discovered early on in her public speaking development that taking a couple deep breaths before beginning helped to calm her nerves.

Most audiences are sophisticated enough to understand when they’re being fed a sales pitch. Be authentic with the people watching or listening to you, and explain what it is you can offer them, without expecting anything in return.

Scanning and panning are your worst enemies. You should make it a point to spend time making eye contact with people in different parts of the room throughout your speech.

When you get nervous, your heart speeds up and your words tend to follow. The more you rush, however, the more the audience turns off. Take a breath between words and sentences.

Focus on your supporters. Find the people who are visibly engaged — those who are enjoying your presentation and nodding affirmations.

“You’re not going to be able to win over everyone, although we would love to,” Jarvis said. “You also need to remember that some people take in information differently. Some people need to write down notes while you’re presenting in order to understand what you’re saying. Just because someone’s not looking at you during your presentation doesn’t mean that they’re not paying attention.”

World-class athletes are known to speak about their pre-performance nerves as excitement instead of anxiety, and that has a lot to do with how they choose to frame anticipation. Get excited about what can go right, rather than worry about what can go wrong.

McNally spoke last of the three, explaining what she sees as the most important benefits of overcoming a fear of public speaking.

Public speaking is a performance, and one that requires a considerable amount of courage and preparation. Because these qualities lend themselves well to leadership roles, those looking to move up in their careers would do well to develop them.

Along these lines, the hard work that goes into becoming a strong public speaker will in turn lead to wider-reaching professional growth. The work ethic can be directed toward other goals.

Not only do humans have a base emotional need to connect with each other, but there are obvious professional benefits as well.

“I feel like public speaking is networking amplified,” McNally said. “It’s a … concentrated effort to really be human and make connections.”

You can harness stress for good.

Similar to Jarvis’s final step, McNally spoke about the positive flip side of stress. After all, chasing meaning is better for your health than trying to avoid discomfort.

Oftentimes, she said, the things we stress about are those we should be paying most attention to.

Your story is your brand.

As Dr. Brené Brown said a few years ago in a now-famous TED talk, “Maybe stories are just data with a soul.” Public speaking is a great way to promote your work and abilities.