This is the first story in a three-part series profiling the United States Digital Service (USDS) and its team at the Homeland Security Department (DHS). Read part two here. 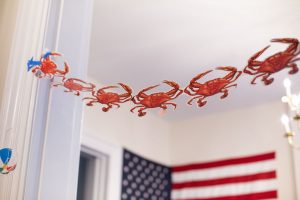 A chain of crabs at the USDS headquarters in Washington, D.C.

It might be the environment – part college dorm, part mission control. It might be the culture; USDS employees wield emojis like a second alphabet, and they love collecting totems resembling the agency’s unofficial crab mascot. Or it might be USDS’ unique approach to government, one that combines the latest in design and technology for the most functional public services.

“I see us as being change agents through firefighting,” Stephanie Neill, USDS’ Executive Director of the Homeland Security Department’s (DHS) Digital Service, told GovLoop during a recent interview. “You identify a major problem that everybody is feeling and seeing at other agencies, and then you fix it. They see how fast things can turn around, they want to keep that going and they want to adopt those processes.”

Federal IT modernization is a hot topic this year and improving the government’s digital services is a driving force behind that interest. USDS’ Fall 2017 Report to Congress estimated that its current projects will save the federal government $617 million over a five-year period. They will also redirect 1,475 labor years towards higher-value work over the same period.

USDS was founded in August 2014 during former President Barack Obama’s administration. The agency quickly made a name for itself by revamping HealthCare.gov so that its design and infrastructure were simpler for users. The changes to the federal government’s online health insurance exchange were transformative, and they ultimately helped 8 million Americans sign up for healthcare coverage during the 2013-2014 open enrollment season.

The overhaul solidified USDS’ methods, and it now applies the same approach to projects across the federal government. USDS pairs the best and brightest technologists with top federal employees, combining their talents on major challenges facing America. The agency’s current portfolio includes projects at four DHS components and three other federal agencies. 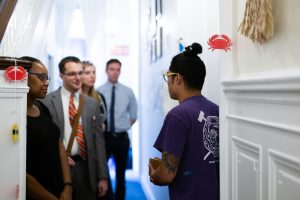 “We’re able to bring up potentially serious issues in a way that becomes blameless, since we’re outside the hierarchy,” Neill said. “I think that’s a problem within government culture – failure is feared. You don’t want to mess up the mission.”

“We can pitch that to recruits and say, ‘You’ll have more autonomy to go and get some things done and test ideas and try out new things in a different environment,’” Andrew Miller, USDS’ Director of Immigration Benefits Processing, said of the agency’s appeal. “We have more variety on the things we can touch, while other agencies have a tighter scope.”

USDS’ team has an unusual mindset focused on teaching new approaches to career civil servants needing fresh perspectives. The strategy is a result of USDS’ term limits, and it forces recruits to think beyond their tenures.

“Nobody in USDS is trying to build their own empire where it’s like, ‘I control everything,’” said James Punteney, USDS’ Director of the Federal Emergency Management Agency (FEMA). “We’re really focused on how we make a team that’s able to succeed without us.”

Punteney has implemented USDS’ philosophy on his project, which centers on modernizing FEMA’s grants system. It combines FEMA’s multiple grants system into one platform, reducing duplicative recordkeeping and streamlining the agency’s housekeeping.

“When we first looked at it, it was like five or six months from someone mailing in their application to getting their green card back in the mail,” she said of the process surrounding the I-90, the form used for green card renewals and replacements. “We helped make it essentially completely paperless. It cut their backlog of cases dramatically.”

USDS’ work on the I-90 dramatically reduced the time users are spending on the green card forms, with the best result for card production being about four hours. Neill said that the outcome captures her agency’s spirit – helping other federal organizations thrive once USDS is gone.

“We want to see the government flourish,” she said. “We want to empower the brightest civil servants and let them take over; It’s to put ourselves out of a job.”

To learn more about the project underway at DHS, check out part two of our series: “How DHS Digital Service Is Revamping Grants, Immigration Systems.”