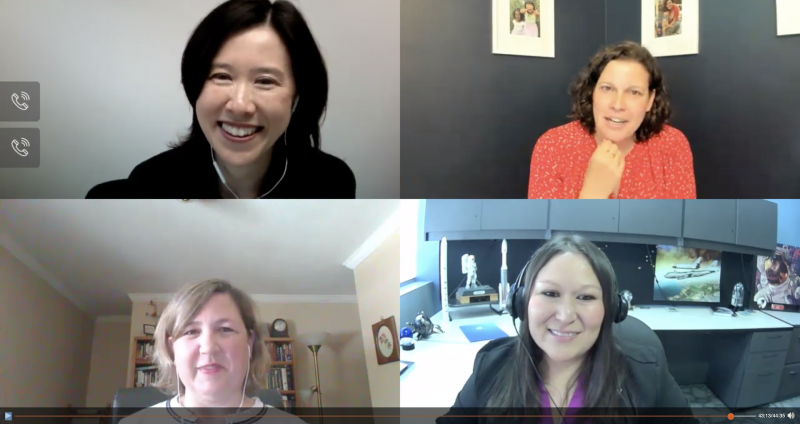 There’s a high chance that even the most impressive title has an unexpected story behind it.

At GovLoop’s online training Tuesday, experts from the space sector had a wealth of career advice to share as women working in a predominantly male field. So far, only about 11% of astronauts have been women, and they make up just a third of NASA’s workforce and a quarter of the aerospace industry.

Within these minorities, the panelists agreed on the value of one leadership tool: trust. In their varied career paths, they highlighted trust-building as a versatile skill that has served them throughout their journeys.

The following are snippets of the panel conversation. They spoke about the challenges they faced, the leadership tools they use and the advice they would give to their younger selves (and maybe you, too).

Quotes were lightly edited for brevity and clarity.

Salomonsen: What did you believe about having a career when you first started out that you now realize is false?

Maisel: When I started out, I didn’t know what I wanted to do. I graduated college and had an English degree. I always loved and was fascinated by space, but knowing I had an English degree, I thought, “There’s no way I can ever be a part of that industry. I’m not smart enough. I don’t know enough about the industry. How can I ever make an impact?”

Ho: The biggest myth I could dispel is that there is no “one career.” I think I’m on career No. 3 or 4. I got my engineering degree but then decided to pursue law, so my first career was as a lawyer. I was an active-duty Air Force officer, so I was a JAG [Judge Advocate General’s Corps], and I practiced in the private practice as well.

Career No. 2 was in the diversity and inclusion space. I got so energized by this idea of being proactive and strategic about how organizations can build a more diverse and inclusive environment. So I served as the chief diversity officer in a couple of federal agencies.

Career No. 3 was a bit of a mishmash. I stepped into some leadership roles, where I was the deputy chief of staff at the IRS for one; I got a White House fellowship to work at Michelle Obama’s office to work with her girls’ education initiative; and then chief of staff for the United States Digital Service, which is a small startup within the White House.

And from there, I got to step into NASA, and I’m doing this cool job working with students and getting the next generation excited about STEM. So you can see, mine was pretty twisty and curvy. If people ask me now, “What are you going to do next?” I still don’t know! To me, there’s more than one career out there.

Roemer: I ended up working for NASA by complete accident. I’m actually an international relations major with a specialization in southern African studies. I ended up working at NASA because I got stuck in a traffic jam at a career fair. At the time, all of my friends were going to move to D.C. And I thought, well, I will be different. I will go to Houston, and NASA will not look bad on my resume. I thought I would stay for two to three years max. And here I am. I ended up taking a detour. And I think that’s something important for folks to realize.

“Sometimes, the detours – the things you may not have planned on or expected – take you where you want to go.”

Salomonsen: What are some barriers you have faced in the STEM field? And how have you moved past it?

On my end, the lawyer in me wanted to speak up every time I felt that exclusion, but that wasn’t necessarily productive. At the same time, I knew staying quiet and internalizing it wasn’t going to be productive either. Finding that sweet spot of picking and choosing my battles, and when to raise my voice and do it in a way where I could be heard, was something I learned along the way. To advocate for myself in a way that I could be heard.

The other thing I did too was find some mentors. I know that sometimes seems cliché, but I have had to navigate different environments, and I wouldn’t have been able to do it without the help of others. People opened doors for me. They pointed me to doors I never even knew existed.

I mentioned that sometimes, it’s the organization, and there’s only so much you can do as an individual. So sometimes, I had to make the tough decision of whether or not to stay or go. And while I switched careers a number of times, some of those times were because that environment wasn’t the right fit for me. As difficult as it was for me, I made the tough decision and took the risk to step away from that environment and step to another one.

Roemer: Confidence has been something that took a lot of attention and work. I recall earlier in my career feeling like I needed to apologize if I spoke up or disagreed with something. But you get to a point where you realize that’s not really productive, and you need to stand on what you know and what you bring to the table. It’s perfectly acceptable to be assertive as a woman, as a leader.

“It’s perfectly acceptable to be assertive as a woman, as a leader.”

Maisel: I often run into imposter syndrome. I’ll be leading a meeting and I stop and think, “Should I really be here? Am I really the right one to be doing this?”

It goes back to finding that champion, finding somebody that also believes in you, and helps you develop that confidence and remember that you are there for a reason.

If you find that champion, let them tell you every single day how great you are until you really know it. Because I feel that if you don’t believe in yourself, then others aren’t going to either. And you can’t expect them to. So at the end of the day, it’s working on yourself and making sure that you’re able to break down those barriers for yourself.

Salomonsen: What is the go-to leadership tool you keep coming back to that has served you well?

Ho: For me, it’s, how can I practice inclusive leadership by getting input and feedback from the team I’m leading? If I’m the one putting my idea out there first, they want to go with that, and you lose some of that creative brainstorming that can come from tapping into the experiences of your team. If you invite ideas, and you invite people to have a voice – even if you don’t go with it – people appreciate that.

In the same token, the other I would point out is to explain the decision that you’re making. In your seat, you get to see across a wide range of perspectives, which informs your decision-making, but not everyone gets to see what you see. And sometimes, when you don’t explain the decision that you’re making, it can seem frustrating, or they fill in a narrative.

I try to explain the decisions that I’m making and the rationale behind them, particularly if there are different views. And while people may not agree with me all the time, taking the time to explain it, they’re willing to understand and get behind me.

Maisel: One of the leadership tools I’ve honed in on is allyship, connecting with others, making sure my team knows that I trust them. I think it’s important for me to build those relationships with the people I’m working with and making sure there is that developed trust and reiterating that we are all on the same team. I might be in a different department than you, working on a different project, but at the end of the day, we are all on the same team.

Roemer: If I would summarize it in one word, it’s trust. It’s building a trusting relationship that goes both directions, where I put full faith and confidence in my team, and I want my team to have full faith and confidence in me. There are some active things you can do, including getting to know people, their personal stories, and knowing when things are going well and conversely when they may be having a hard time. That’s one thing I have focused on throughout my journey, making sure I can build those trusting relationships along the way because I think they serve you well in any situation.

Salomonsen: Considering where you are now, what advice would you give to your younger selves?

Maisel: I wish at the time I was younger that I would recognize that my value does not decrease just because of somebody else’s inability to see my worth.

Roemer: Don’t be afraid to take a detour. Sometimes, the detours get you where you are going, rather than following a straight line.

Ho: Be patient. When you make those decisions, you want everything now. But your life has seasons, your career has seasons. The decisions you make now aren’t going to be end-all-be-all.

Trading Technical Debt for Managed Services in the Cloud

How to Launch Affinity Groups at Your Agency