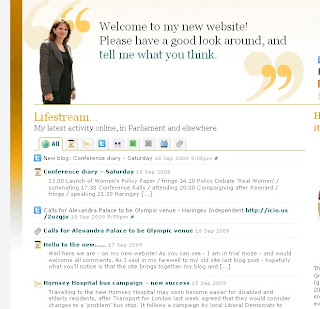 LibDem MP Lynne Featherstone is the party’s lead on web stuff and so she should be – she’s had a blog since 2003 and has fed it practically everyday since. Lynne even credits her election victory to her strong online presence and use of it as an organising tool.

When she came to updating her website she chose Simon Dickson of Puffbox, the man responsible for many website transformations including Number Ten‘s.

For her site Dickson has done something entirely new and – I think – brilliant. Called a ‘lifestream’ it brings together all the flotsum and jetsum of Lynne’s online life in one place – her site.

So the grand concept of the site is the use of a tabbed ‘lifestream‘ as the homepage. The initial view lists her last 10 actions, no matter where they happened – including Early Day Motion signatures, which required me to write my own scraper. Then, if you want to see her activity on one of those specific areas, you just click the appropriate tab. It’s all driven by RSS; the tabs are powered by ajax; the lists are generated by a cron for obvious reasons.

So rather than a whole lot of icons you click through to find content this brings it all together. As I said, brilliant. And just maybe a first?

(Just not sure about the name ‘lifestream’, only I can’t think of anything better).

Great Blog! I’m very impressed by what is happening in the UK in terms of e-democracy/e-participation and the whole movement towards increased civic engagement. Sites like AskBristol are impressive, and organizations like the Local Government Information Unit (LGiU) are impressive. I’m currently starting a thesis looking at what initiatives have lead to the UK leading in this area compared to the Web 1.0 world that municipalities continue live in here in Canada even after years of leading in e-gov. What do you think are the defining initiatives that have made the UK so successful in e-democracy and the use of emerging technologies like Web 2.0?

Chris. Try @PubSecBloggers or the links list on my blog. NB sometimes when you’re ‘inside the beast’ it’s difficult to be as impressed :]

Lynne Featherstone’s site, btw, is nothing to do with gov as she’s an opposition MP.

Steve – been told since this post that ‘lifestream’ isn’t a new name or idea. However this form of it and it being on a politician’s website apparently is.

I’ve heard of lifestreaming before but more in terms of reality start context. Camera on you 24 hours a day and talking about your life. I like this take on it especially in terms of the political side.

In my opinion, Lynn’s site is pioneering in the ‘government’ context, very transparent, approachable and responsive to her constituents. In fact, I left a comment on the site, and she responded by email. In Canada we have some excellent e-Gov work going on at the provincial and federal levels (Service Ontario & Service Canada) but we lag in the e-Democracy and online civic engagement in general. It seems to me the driving factor for local government initiatives in e-Democracy/e-Particpation came from the federal UK level as part of their “Democratic Renewal” programs.

Chris. There is a lot of work going on with engagement which all the main parties are supporting. It’s interesting to see so much North American attention as we often look the other way! Lots of sites covering it but here’s a good start http://www.futuregovconsultancy.com/