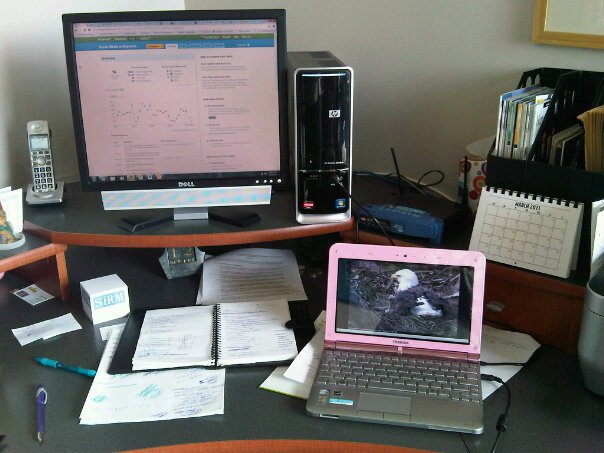 Since early 2010 I’ve been creating photo essays and capturing and sharing images from around the world that illustrate life in the Digital Age. In addition to reflecting the latest digital trends and new applications, my goal has been to highlight some of the timeless and transitional aspects of the new era in which the world finds itself. This piece provides brief descriptions of and links to the places where these essays and images have been published.

Evidence abounds of how life in the Digital Age is vastly different – and in some ways not so different – from a time not too long ago when electronic technology wasn’t so fully integrated into our daily routines. Sometimes the evidence is blatant (e.g., a QR code on a banana); sometimes it’s more subtle (e.g., graffiti as a form of social media), but the signs are all around us if/when we choose to look.

I’ve made a point of looking since at least early 2010, when I visited Rome and Cairo. In addition to inspiring my first official blog post, a photo essay entitled 11 Lessons about Digital Communities from Rome, the trip made me more aware of how the reality of life in a more technology-driven world both does and does not conform to our expectations and assumptions. Maybe it was being surrounded by all those ruins and ancient artifacts…

Since that trip I’ve continued to capture images of life in the Digital Age when I’m out and about – and especially when I travel. And because I like visual storytelling, I’ve created a number of photo essays that I’ve shared via SlideShare, Facebook, and Pinterest:

Scroll down to learn more about and access the photo essays and images I’ve created and shared. If you have any of your own photo essays or images that reflect life in the Digital Age, we’d love to see them and help you share them with others!

Life in the Digital Age: Photo Essays on SlideShare

Dublin in the Digital Era: A City in Transition (2012). Using images from a trip to Dublin, Ireland in the fall of 2012, this photo essay offers examples of how the city and its residents are moving forward into the Digital Era, while simultaneously clinging to remnants of a paper-based way of life. Dublin is fairly typical of most cities – especially those in countries outside the United States, where physical books and newspapers are still highly valued and heavily used.

An Post: A Venerable Institution Transforms Itself (again and again) (2012). On a trip to Dublin, Ireland in the fall of 2012, I was captivated by the country’s Post Office (An Post). Unlike the US postal system, An Post seems to have done a great job of transforming itself over time to adapt to changing circumstances and technologies. This photo essay offers examples of how An Post has embraced and responded to Digital Era realities, and demonstrates that its current adaptive capacity is deeply rooted in a history of flexibility and nimbleness.

Think You Know What Social Media Is? Think Again. (2011). Using images from a road trip, this SlideShare photo essay demonstrates that social media is about more than digital technology. Specifically, it reveals that the channels through which the principles of social media manifest themselves can be low tech as well high tech, and that their use and value are determined by our individual and organizational objectives. The goals of the essay are to demystify social media and get people to think more broadly about it and its economic and social roles. Providing this perspective on digital manifestations of social media should help everyone from rookies and detractors to mavens and advocates understand that today’s social media isn’t just novel – it’s normal.

Life in the Digital Age: Photo Albums on Facebook

Vienna (and more) in the Digital Era (2013). When attending a conference in Vienna, Austria, I found lots of great Digital Era images, which are captured in this photo essay. I travel a fair bit, and though some of these images reflect now-classically familiar ideas (e.g., find us on Facebook!), I was also struck by how quickly things are changing. I see new technologies and applications being introduced constantly.

Celebrating “Books” in the Digital Era (2012). The Printer’s Row Lit Fest used to be called the Printer’s Row Book Fair. But as our notion of what a “book” is morphed, and print media gave way to digital media, the name – and what was being celebrated – also had to change. These images and my observations reflect those changes.

Tourism in the Digital Era: WWST 2.0 (2011). This album shares some of the ways in which digital technology in general – and social media in particular – enriched a road trip in the summer of 2011.

Social and Digital Tech in Rome and Cairo (2010). This album contains examples of social media and other digital technologies from my trip to Rome, Italy and Cairo, Egypt in February 2010. I was particularly interested in examples that contained elements of surprise or defied people’s expectations of how these technologies can and should be used.

Life in the Digital Era. Includes our own images, as well as articles and other media illustrating how social and digital technologies have changed everyday life, from both personal and professional perspectives.

Mobile/Website Tech. Addresses the technical aspects of mobile and website technology, including HTML, SEO, and WordPress. Also, includes examples of QR code usage and information related to the technology.