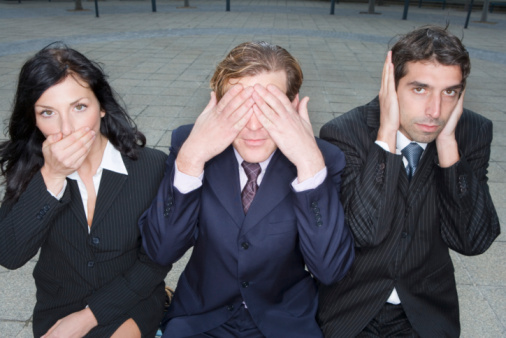 Ever been in a new place of employment?  Struggled to grasp the logic in new processes or in understanding why folks do things the way they do?  You are not alone, I assure you.

Last week we discussed what it was like to be the new guy in the context of deferring to experience regardless of rank.  This concept applied both to the new guy as well as the new guy’s boss and can be read here.

A modern day parable regarding the behavior of monkeys in a scientific experiment follows below (rather than me garbling the story).  Don’t worry, it’s illustrated and isn’t laden with scientific terminology.  However, it is a disturbingly accurate illustration of a phenomenon many (if not all) of us are familiar with in government related work. 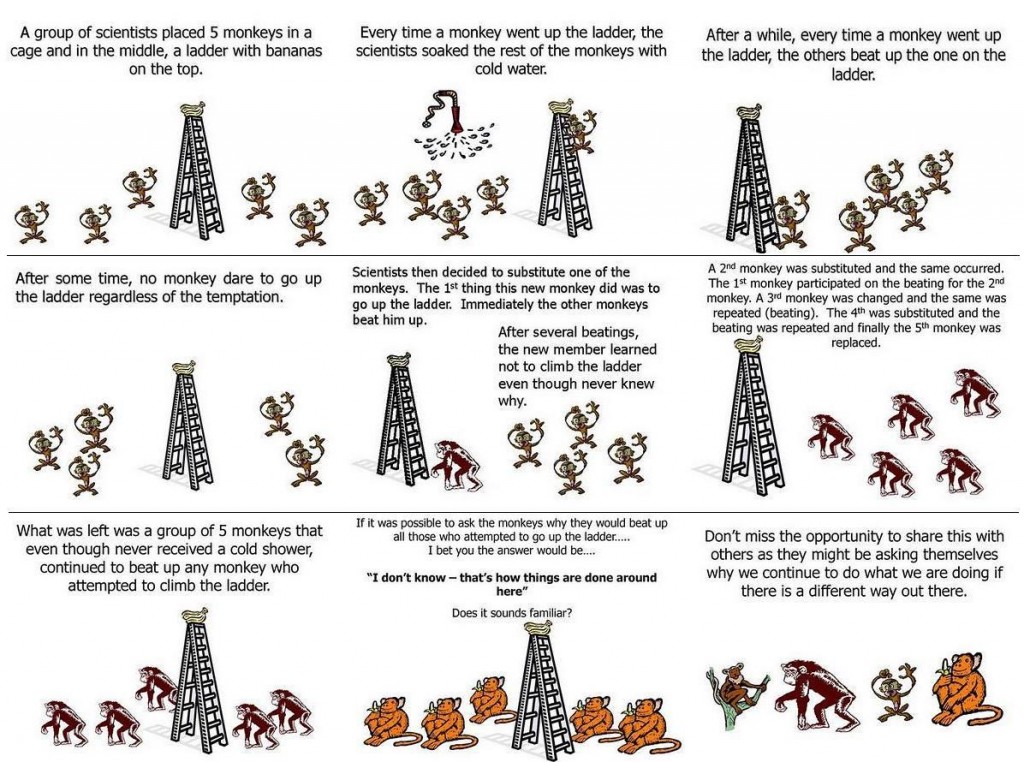 So what do you do when you want the proverbial banana without the associated beat down?

What has worked for me over the years to varying degrees is shifting the dialogue away from “new guy” and onto “new eyes.”

If I, as the so-called new guy, approach co-workers or supervisors with a never-ending string of questions it usually manifests as an annoyance.  Intentions might be purely for clarifications so as to not offend, nor negatively impact processes for others, but in the end this “ask as it occurs” tactic wears thin quickly.  It may in fact be an indicator of a training or continuity shortfall, but that’s another animal all together.

Generally speaking it takes 2 weeks to form a habit, good or bad.  So after 2 weeks on the new job I put together a list of all my observations, good or bad, and present it to my immediate supervisor.  Present being the key word.  Present the good things first and mention how you are impressed by them.  Then, present your other observations in the context of opportunities for improvement, not a gripe list.  And on that note, if you really want to get on their good side early, present your observations with possible solutions.

I usually frame it with a statement along the lines of:  “While I may have much more to learn and am willing to do so, I’ve noticed a few areas the company/division/section might be able to improve upon.”  Or, if you are craving clarification on something you are sure is completely illogical, try:  “Help me to understand why we do it this way so I can be a better team mate.”  This at least gives them a chance to alleviate your concerns.

It might seem like the responsibility should fall somewhere else, but don’t forget, you’re the new guy.  They already know what’s to be done, how to, when to and with whom…because that’s the way it’s always been done here.

Paul, our team was just talking about best practices for starting a new job today. This is great and timely advice for us. Thanks for sharing!

Crazy how everyone can relate to the scenario; shows how universal human behavior can be.

This is timely for me as I am in my second week at a new agency after being at the previous one for 17 years. Instead of playing the New Guy Card I am going to use the “new eyes” approach. I like it and it’s exactly how I think since I’m not new to government but do have a different approach to projects, etc.

Great read! Excellent tips for “fitting in” your new surroundings and establishing yourself as a thought leader on your new team.

Awesome graphic! Great depiction of why it’s important to question the status quo every once in a while.

There’s no way anyone could’ve captured it better other than perhaps a YouTube video. Hmmm…