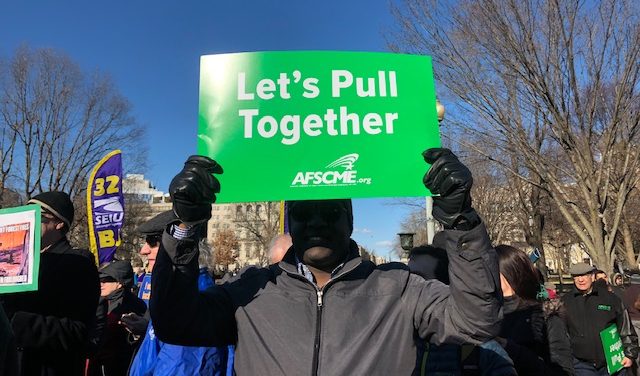 Furloughed employees, union leaders and elected officials gathered blocks from the White House on Jan. 10 to express the need to end the shutdown.

“We’ve partnered with the American Federation of Government Employees to put pressure on members of Congress to end the shutdown,” Gonzalo Salvador of the American Federation of Labor and Congress of Industrial Organizations (AFL-CIO) told Govloop prior to the event. “We’ve been advertising this for a week, under the hope that the government would soon reopen, but when that didn’t happen, we ramped it up. We expect between 200 and 500 people to attend the rally.”

Hundreds of people did indeed gather outside of the AFL-CIO’s D.C., office in the cold wind and sunshine, prepared to march to the White House. Speakers included Sens. Bernie Sanders, Ben Cardin and Mark Warner. Among the furloughed employees was Stephanie Colbert of the Internal Revenue Service (IRS), who has been with the agency for 35 years. She told Govloop: “I’ve been through multiple shutdowns, and unfortunately this has been one of the worst shutdowns for me because I am nearing retirement. This is going to impact whether or not I can retire when I become of age.” 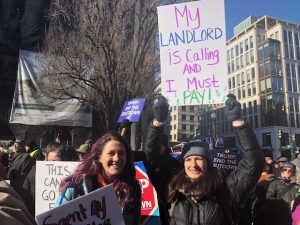 Colbert’s retirement is further affected because she has to dig into funds she originally set aside to sustain her through retirement. “It takes a while for your paperwork to get processed and for you to get a check,” she said. “You’re depending on your savings, which not all of us are fortunate enough to have. Some of us are the sandwich generation, where we’re helping our parents and our children.”

On Jan. 10, the Senate unanimously voted on a bill to ensure retroactive pay for furloughed employees; employees may still want to explore pay and benefits related to the shutdown in the meantime.

This shutdown feels different to Colbert because of the parties involved and the polarized political climate. “We have a president who does not care, who cannot relate,” she said. “He’s a billionaire. He cannot relate to me or anyone else who works every day.”

Speakers took the stage at the rally for over an hour, repeating the sentiment that the shutdown needed to end as quickly as possible considering that the livelihoods of more than 800,000 federal workers were at stake.

“Let’s call this shutdown what it is,” said Richard Trumka, President of the AFL-CIO. “It’s a lockout. Hardworking American patriots are being locked out of their jobs for no reason other than the politics of fear. Shame on the Senate. Shame on the White House. It has to end now.”

He also leveled criticism at the president: “Instead of going to the border for a photo-op, President Trump should be on the Hill negotiating a deal to open the federal government and put our people back to work.”

Trumka asked twice, “is working without pay okay with any of us?” The crowd responded “no” both times.

“The people that won’t get next week’s pay, or the following week’s pay, if you ever really looked at those people they’d say, ‘Mr. President, keep going,’” Trump said last week, alluding to his belief that most workers want him to continue the shutdown regardless of any personal economic impact.

However, a recent statement from the American Federation of Government Employees (AFGE), a union that represents a large portion of TSA employees, revealed that some TSA screeners have left the job since the shutdown started and that others are considering leaving if they don’t receive their pay this week.

“Every day, I’m getting calls from my members about their extreme hardships and need for a paycheck,” Hydrick Thomas, President of AFGE’s TSA Council, told Politico. This could create “a massive security risk for American travelers” he added.

The government shutdown has also caused federal scientists at NASA and the National Oceanic and Atmospheric Administration (NOAA) to miss a key conference of the American Meteorological Society. Disaster aid to states and cities has been delayed because guidelines for applications cannot be issued. Understaffed federal agencies can’t recruit or onboard new employees, and state infrastructure projects are delayed.

“It’s more than just the 800,000,” Sen. Ben Cardin of Maryland said at the rally. “It’s the people of America who are being denied the services they need. It’s our economy that’s suffering as a result of President Trump’s policies. People being hurt. It’s got to end. It’s got to end now.”

Eric Young, President of AFGE’s Council of Prison Locals, explained the impact of the shutdown on law enforcement nationwide: “Law enforcement officers all around the country today are showing up in our nations 122 facilities. We work with some of society’s worst of the worst, enemies foreign and domestic in our prison … Today our prisons are operating despite these extraordinary conditions, using secretaries, teachers, cooks to fill in behind missing corrections officers.”

Young highlighted discontent with the current administration and stated the importance of prioritizing internal security: “This administration has levied policies to underfund and freeze our hiring inside our prisons … Our pay is our priority. Funding the internal security of this nation is our priority. To know that we have our U.S. military, our Coast Guard, not getting a paycheck, is sad and indecent. Surely, we are a people who protect the people of America.”

Speakers at the rally also brought up the issue of Congress being able to operate independently of the president and open the government.

House Majority Leader Steny Hoyer stated the importance of organizing to meet a common purpose: “We need to make sure that 800,000 people can put bread on their table tomorrow. Through history, many have died. Many have been injured, many went without, many walked the line so that workers would get fairness. That’s all we are asking Mr. President: fairness for federal employees and fairness for the American people. Open up their government.”

Shutdown Got You Down? Remain Resilient