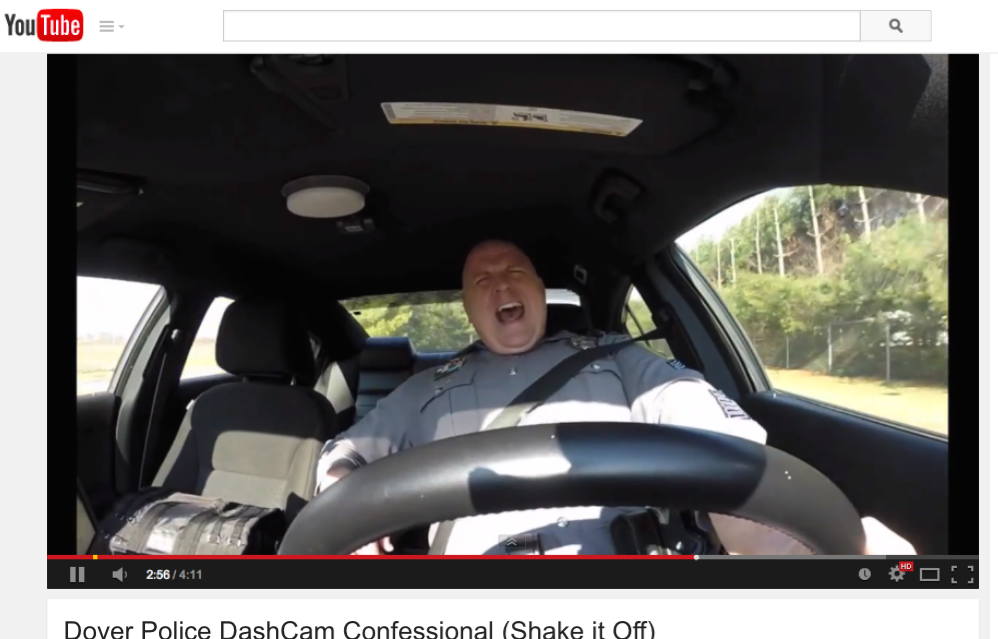 Police dash cams are important for things such as transparency, security, and incident documentation/verification. You know what they’re also great for? Video evidence of cops belting out Taylor Swift tunes. In a time when police officers need all the good publicity they can get, the Dover, Delaware Police Department posted a video on their YouTube channel of Officer Jeff Davis jamming out – I mean, seriously jamming out – to “Shake it Off.”

Public agencies can do some pretty cool stuff with YouTube. It’s a great way to engage and inform citizens and sometimes to simply have fun. Here are some other snazzy government YouTube channels to check out:

With nearly 500,000 subscribers, NASA has a pretty awesome YouTube channel. Videos include weekly updates of “[email protected]” or, “This Week @ NASA,” as well “Space to Ground” which is a web series all about the activities aboard the International Space Station. You can also learn about Orion – NASA’s new exploration spacecraft – and browse topics such as climate change, comets, and supernovae in “the ScienceCasts” web series.

The Centers for Disease Control and Prevention (CDC)

The CDC has a very informative channel. Videos cover topics such as HIV/AIDs, STDs, smoking & tobacco use, and many others. The videos often include personal stories from everyday citizens as well as some celebrity appearances, including hip-hop artist and producer, Swizz Beatz. There is also the “CDC En Español” web series, dedicated to the increasing number of Spanish-speakers in the U.S.

The Obama Administration is known for its social media prowess and YouTube is no exception. My personal favorite is “West Wing Week” where you get to follow President Obama around (well, kind of) and get some really cool insight into the daily activities of the president. “Inside the White House” includes topics ranging from solar panels to beer brewing and “White House White Board,” starring marker- wielding senior staff as well as Vice President Biden, explains major issues and policy initiatives such as the minimum wage and the Affordable Care Act.

Since I mainly cover tech topics for GovLoop, this one may be a little biased. But NIST has some really interesting stuff on its channel, including a cool animated video, “NIST Illustrated,” which explains the basics of what NIST does – which is not very basic at all. They have videos covering information technology, electronics and communications, and fire research – including simple topics such as Christmas tree fires and much more complex ones such as why World Trade Center 7 fell.

Finally, you know you can always get some cool footage when you’re covering the entire air and the sea — that’s what NOAA does. “NOAA Marine and Aviation: At Sea, In Flight, At Depth” series highlights operations at sea and in the sky, NOAA’s fleet of ships and aircraft, and its diving program, among other things. I took a special liking to NOAA’s Fisheries videos, including a “symphony of sharks” as well as the alluring “spiny dogfish.”

As you can see, these are all federal government channels, but state and local governments can also benefit from utilizing YouTube. For example, here’s Austin, TX’s channel and here’s Norfolk, VA’s.

If you love Taylor Swift & Government. Check out what we did here in Gilbert, Arizona. 22 has never been so great. 🙂 http://youtu.be/CiVMBnmSILA

That video was seriously awesome, Tiffany! Thanks so much for sharing!

Are You Sitting On A Million Dollar Idea?