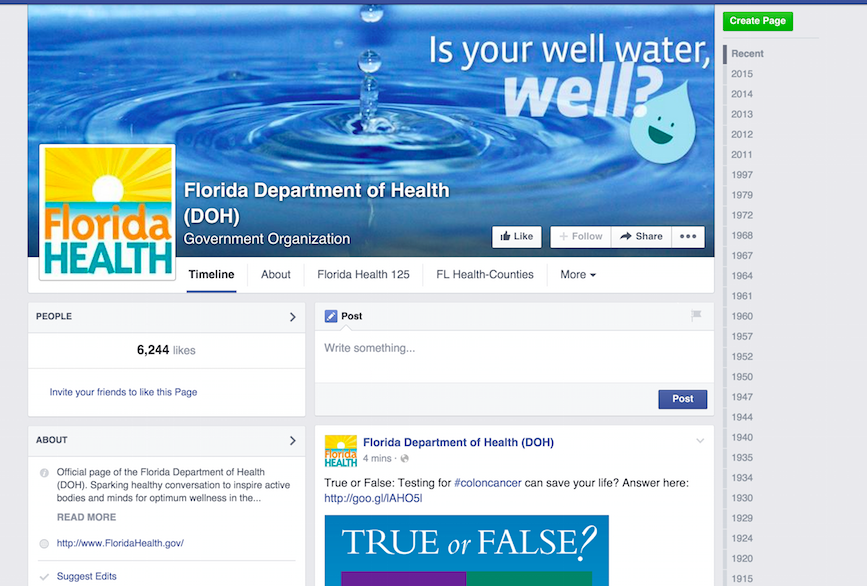 From sharing weight loss tips to encouraging public safety initiatives, Facebook is a great place for organizations to encourage healthy lifestyles — and many state health departments are looking to use it as a platform to encourage citizens to make healthy decisions regarding personal care.

To run a successful Facebook campaign, the first step is having a clear idea of what your goals are, Hughes said. In this case, the goals for the broader Tobacco Free Florida media campaign were straightforward and well defined from the outset: The bureau wanted to prevent youth and adults from starting smoking; to promote quitting; and to eliminate secondhand smoke for all Floridians.

DOH officials realized that Facebook would be a highly useful tool in furthering their campaign goals. Overall, their social media plan positioned Tobacco Free Florida as trusted, relevant, and thorough. This strategy not only reached a larger audience, but also engaged the audience and advanced the campaign’s initiatives using dynamic, multi-dimensional online conversations that were unattainable with traditional media.

So, their next step was to define Facebook’s role and contribution to the campaign goals. The team decided it wanted the Facebook campaign to increase brand awareness, drive people to the Tobacco Free Florida website, and educate the audience about tobacco-related facts.

Having clear objectives of what they were looking to do through Facebook helped officials know what their actions needed to be on a very specific level.

So, what did they do next to achieve these goals?

First, Hughes and her team specifically targeted their Facebook audience. Although they wanted to appeal to a wide variety of demographic groups, their primary target was the cessation audience – adults 18 and up. “Facebook offers that kind of granular targeting,” Hughes said.

Well-targeted campaigns succeed on a number of levels. “We can be certain that the content we’re creating is hitting the people who are going to find it the most relevant,” explained Hughes. “By targeting in that way, we can ensure that our brand remains relevant, and that what we’re doing is engaging. It makes our campaigns more efficient, because we’re only targeting those who will be interested in our content.”

Additionally, the Tobacco Free Florida team collected data and analyzed the results of the Facebook campaign as it progressed. The team examined a variety of metrics, rather than looking only at the number of likes or website hits. Team members chose to look at statistics that measured active engagement, not just audience size.

Repeatedly testing their efforts also helped the Tobacco Free Florida team understand what was working and what wasn’t. There was no magic formula for hitting high markers on the statistics, Hughes explained — rather it was important to experiment and look at the outcomes.

The results came on various levels. On one level, the team collected Facebook statistics to see its reach and the level of engagement beyond the amount of likes. The team also made a lot of progress toward the campaign goals by encouraging its audience to actively engage with the content on the Facebook Page. For DOH, the metrics that were relevant to judge engagement were diverse — video views, clicks to its website, comments and shares.

The other form of results the team looked at were tobacco use statistics among the Florida population to see how the message was being received. Florida has seen a massive drop in smoking rates among youth and adults. As of 2013, the year with the most recent data available, the adult smoking rate in Florida is 16.8 percent of adults and 4.3 percent of youth, which is significantly lower than the national average: 17.8 percent of adults and 23.3 percent of high school students, according to the Centers for Disease Control and Prevention.

What’s a big bonus for an obviously successful government Facebook campaign? Massive support from the top. “I’m happy to say that we have done such a great job with this program that there’s a high level of trust from the Media Marketing Manager for Tobacco Free Florida… all the way up to the State Surgeon General,” Hughes said. “They’re really pleased with this program.”

The Simplicity of the Software-Defined Network

An Update on the Data Act