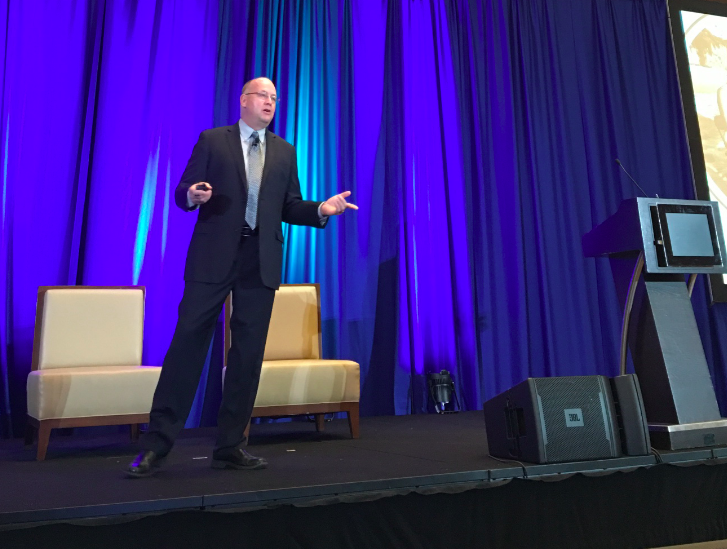 GovDelivery’s 9th Annual Digital Communications Summit kicked off with a customer-centered keynote, Fred Larson, a Customer and Patient-Centered Advocate who has worked for both the public and private sector at organizations such as Disney and the Army, respectively.

As a customer service guru, Larson has had many opportunities work for the good of the customer and found that it is not a job that can be taken lightly. To prove it, he asked the audience just how many of them have positive digital connections with businesses or organizations — and not many answered in the affirmative.

He explained the answer to better customer service in the public sector was a simple one, but not easy: “You have to listen, understand, and make connections.”

Larson used a number of examples from his own time at Disney and Walter Reed Army Medical Center.

It is possible for an organization to hire the most talented and passionate people, put them to work, and still experience operational problems.

Larson said that was the situation Disney found itself in when it opened. “There were huge operational problems, but so much passion that people worked their hearts out.”

He said that way of running the park worked for a while, but eventually workers became frazzled and “the company was cracking and crumbling behind the scenes… because they didn’t have a purpose to work for.”

In response, at the advice of Van Arsdale France, the man who wrote the employee handbook still in use today, Walt Disney made his purpose for opening the park — giving families a magical experience — very clear, therefore better engaging his workers.

Larson said from then on, workers became even more focused, efficient, and engaged in the company. And the same can work for your organization.

After working for the Happiest Place on Earth, Larson was asked to become the deputy commander for transformation at Walter Reed Army Medical Center. While he admitted the culture change was something of a shock, Larson found that he could bring the same spirit of collaboration he nurtured at Disney to Walter Reed.

“People are reluctant or afraid to do something outside of their lane,” he said. “So you have to begin to change the narrative.”

Instead of just asking people to communicate across departmental or hierarchical boundaries, Larson made it fun to do so. “We got little buttons that said, ‘the answer to your question is yes. Now how can I help you?’” He said with that change alone, recently vacated rooms at the hospital became available more quickly than ever before, improving the patient experience.

One Small Step at a Time

Although making changes to improve the citizen experience can seem like a daunting task, Larson said even the small things can make a huge impact.

During his time at Walter Reed, there were many improvements made to the building itself. Broken windows were fixed, rooms were cleaned, and broken equipment was replaced. In response, Larson said many who had criticized the organization at the beginning of his tenure began to praise it based on its improved physical appearance.

“Even if your service is great, if people don’t perceive it that way the relationship will not improve,” he said.

Working to listen and understand your citizens, Larson said, can make a lasting impression on the people your organization serves. But no matter how many steps your organizations take to improve relationships based on citizen feedback, remember that the challenges you face will always evolve. “[So find] who you do not understand,” Larson said, “and work to listen, understand, and connect.”

See how we can help you build relationships with your citizens and improve their experience with your company. Or, check out all that the GovDelivery Digital Communications Summit, “Transforming the Citizen Experience,” had to offer here.