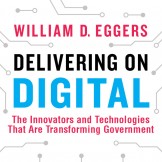 I love books — I just do. I never get to read as much as I hope, particularly these days, but when one finds a book that causes you to really think… well, that is something that deserves celebration. One of the best ways I’ve found to make books come alive is as part ofRead… Read more »

Originally published under the title “Workplace Flexibility as the New Normal” as part of “The FCW Challenge” by Anne Weissberg, William D Eggers, May 14, 2010 As William Gibson wrote in Neuromancer, “the future has already arrived. It’s just not evenly distributed yet.” If you think that the federal government will never go to aRead… Read more »

Back in late September, I was inspired by a great new book called “If We Can Put a Man on the Moon: Getting Big Things Done in Government.” It’s authored by William D. Eggers and John O’Leary. Eggers is a leading expert on government reform who currently serves as the global director for Deloitte ResearchRead… Read more »