Oakland’s Civic Design Lab is a public-private partnership embedded in Oakland’s City Hall.  This means we have a foot in two worlds: the private the sector and the public sector.

For practical purposes, this means that the work of the CDL must necessarily get sign off by at least one if not all of these entities. It is also likely that the director of any impacted department must also sign off. In fact, one additional piece of governance — the administrative instruction — sets forth proscribed individuals who must sign off before a CDL project proceeds. These people include:

This photo illustrates the approval process a project must go through to be greenlit.

Once a project is greenlit, it can then enter our design process – the first portion of which brings together interested stakeholders as we co-create the table: 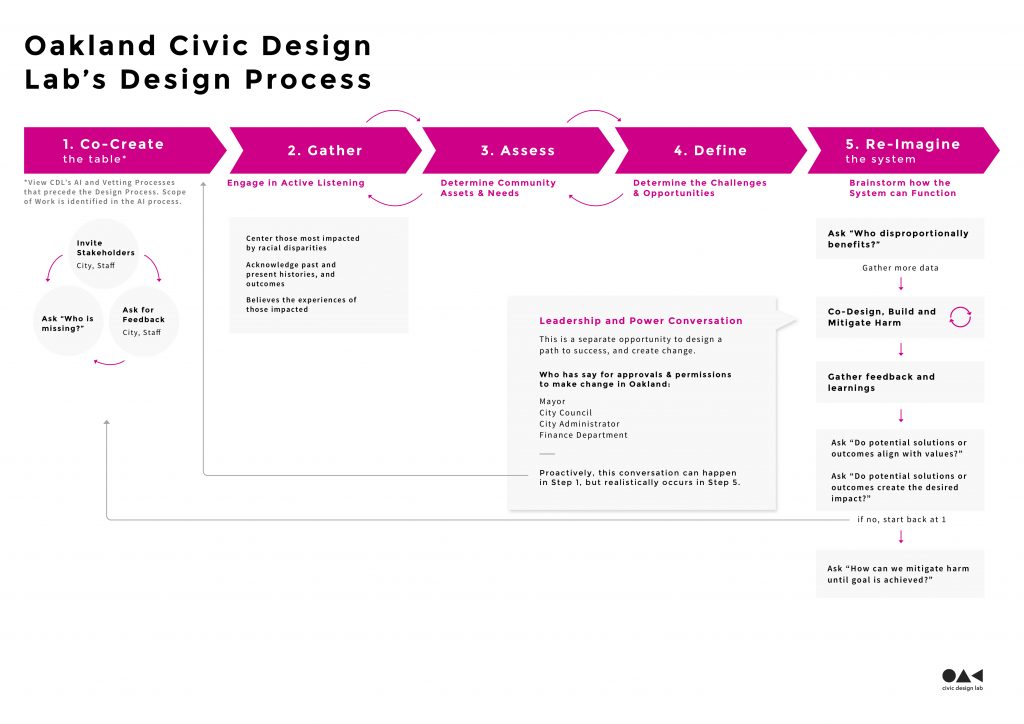 The photo illustrates the various steps of our design process.

An important thing to note is that the administrative instruction review and approval process is also part of the co-creation of the table. More importantly, however, is that there is again a reference to Leadership and Power during the last step of our design process, as we are co-designing and building programs to prototype.

Power or references to power are prominent throughout the entirety of the process. This, of course, is no accident. As I said in my previous post, my job as the Civic Design Lab Manager is to innovate, a task that seems impossible without understanding all the nuances of culture that pervade the City.

I was perhaps a little too vague in that post, as understanding is not enough: successfully navigating is what will actually impact the CDL’s ability to be successful. This is part of the reason that our current conversations are all about power.

I mentioned in my last post that my current role as the CDL manager is my first job within government. As such I’ve spent a lot of time trying to understand how to simultaneously grasp and grapple with power. As we think about the content for a curriculum, the initial targets for trainings and internal communications strategies, the navigation of power is the central theme.

Bureaucracies are built on and thrive on hierarchy and process. The only way to successfully embed a culture of vulnerability is to aim for those in power. The ability to transform failure into a learning process and not a judgment or shaming process comes from those with the agency to implement change. The ability to fund or not fund a pilot comes from those who control the budget. Successful culture change must be adopted and modeled by those at the top.

As a parent, I analogize the role of the power structure in innovation to mine as a model for my children. Uncertainty and failure can either be seen in stark negative terms or as necessary for growth and development. This is clearly articulated in the response a Quora user had to someone asking how they should react when their child falls.

“That 3-second delay between the fall and the crying is usually the result of them reacting to you. You freak out, making them think something terrible has happened, so they start crying. Wait and see what they do. If they seem ok, help them up if they are still down. Let them go back to playing. Falling down is part of being a kid, and usually not an event. Don’t make it into one. If they are hurt, it’s even more important not to freak out. What a scared kid needs is someone who is in control and taking care of things. Give them first aid or take them to the emergency room, calmly.”

If creativity, vulnerability and innovation are to be embraced, those in leadership can’t freak out when certainty is unavailable to them. How leadership reacts will have ripple effects that impact everyone under them — similar to the parent overreacting to their child falling.

The key to government innovation is best articulated by the Lox song “Money, Power, Respect.”

What we all need is leadership buy-in (power). Once we have that, we can access resources (money). Those two things will allow staff to be creative and innovative without fear or shame (respect). Then they can embrace vulnerability without anxiety (sleep at night) and ultimately we can get to doing the work of making government more responsive to those who need it (eatin’ right).

Brandon L. Greene is a GovLoop Featured Contributor. He is the Manager of the Civic Design Lab in Oakland. Brandon is a graduate of Boston University Law School where he was a Public Interest Scholar and Martin Luther King Social Justice Fellow. Previously, Brandon was an Attorney and Clinical Supervisor at the East Bay Community Law Center where he created and lead the decriminalization of poverty clinic. Brandon’s article Depraved Necessities: Prison Privatization, Educational Attainment and the Path to Profit was published in 2013 by SRBLSA Law Journal. His forthcoming articles will be published in the Harvard Blackletter Law Journal and the Berkeley Criminal Law Journal. Twitter: @brandonlgreene. You can read his posts here.