Why is change so hard? We delight in things that are new. But we also distrust them. I’m thinking about how history has treated new technology. Things that are designed to make life easier (the steam engine, factory automation) are initially met with cynicism. Today we’re a decade into mainstreaming artificial intelligence (AI), and organizations are excited about the potential, but still cautious about adoption. Why is that?

During the Great Depression, people blamed machine automation for unemployment and idle workers. We know that eventually the public overcame its misgivings, spawning an industrial revolution. This same pattern has been repeated throughout the years. Just take a look at this timeline charting automation history. 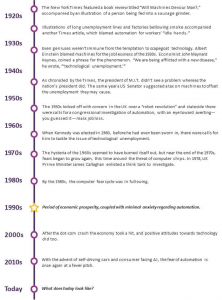 History proves that automation opens the door to further transformation. AI is no different. Simple business intelligence tools already free analysts from time-consuming tasks and allow them to focus on higher-value work.

Over time, basic automation and business intelligence tools have evolved into more sophisticated data science programs. Already we see how automated data collection and advanced analytics are generating unprecedented insights for organizations. These initial ‘wins’ will progress analytic capabilities even further, beyond what we can dream up today.

But human unwillingness to change remains our biggest challenge.

The sooner organizations embrace change and ready their staff for adoption, the sooner they can realize AI’s benefits. So, what’s the hold-up? In a word, culture. Changing the underlying principles of an organization takes time and serious effort.

Everyone wants the benefits of AI—speed, computational power, new insights—but not everyone is ready to commit to reshaping or reinventing a data-savvy culture to support it. The initiative has to start from the top—with leaders who truly want AI and are ready to do what it takes. Being comfortable talking about AI in plain language, and articulating how and why it’s being used, is a first step. Employees can mentally find their spot in this new future and open themselves to learning new skills and adopting data science.

One of the reasons why automation is eventually adopted (just look at that timeline) is that a new generation of employees joins the workforce with fresh perspectives and a willingness to embrace automation. In our case, the wave of AI adoption is just waiting for digital natives to finish college and get to work. They will be joining a multi-generational workforce that has already spanned massive technological growth, including a generation who grew up when television was introduced as a centralized technological source of content, another generation who worked through the introduction of the internet as a distributed source of content, and another where social networks empower personalized content creation and sharing of knowledge and experiences.

All generations have demonstrated in one way or another that they are capable adaptors of disruptive technologies. Still, change is hard, especially at today’s rapid pace of change and disruption.

AI outpaces humans in performing some complex tasks, but even the most advanced machines can’t replicate humans’ ability to perceive, interpret, and react to the uncontrollable elements of the world around us. The ideal adoption strategy pairs humans with machines, leaving computationally-intensive tasks to AI while humans focus on high-value knowledge work involving deep domain expertise, the human perspective, and critical thinking.

History, not hysteria, repeatedly proves that humans can and do adapt as new and transformative technologies are adopted.

Want to keep thinking about change? Read Data & Analytics Catalysts: Agents of Culture Change or become an advocate, championing AI adoption in your organization, with Building an AI-First Organization.

Dr. Kirk Borne a GovLoop Featured Contributor. He is the Principal Data Scientist and an Executive Advisor at management consulting firm Booz Allen Hamilton since 2015. In those roles, he focuses on applications of data science, data management, machine learning, and AI across a variety of disciplines. He also provides training and mentoring to executives and data scientists in the use of data and machine learning for discovery, decision support, and innovation. Previously, Kirk was a professor at George Mason University for 12 years in the data science degree programs, and he spent nearly 20 years supporting data systems activities for NASA space science missions. You can read his posts here.

Great article! I do think that fear of jobs being replaced drives some of the current concerns around automation, but the points you brought up, of a new generation coming in that is willing to embrace AI and of how all generations currently working have proven in some capacity or another that they can embrace disruptive change, alleviate some concerns. How do you think that the new generation can train itself to embrace AI? Are there specific skills they should prioritize learning or is it more of a mindset?

Thanks Sherin. First, I always emphasize the importance of developing and nurturing the key aptitudes for success in this fast-paced digital world. I call them the “The 7 C’s”, though I have more than seven. They include Curiosity, Critical Thinking, Creativity, Communication (data storytelling), Collaborative, Computational, Continuous lifelong learning, Compassion (empathy, human-centricity), Consultative (listening to stakeholders’ needs and requirements), Courageous problem-solver,…

With regard to skills, that will depend on the individual’s expertise, talents, and passions. The skills may include programming, math, science, design, communications, change management, marketing, etc.

Check out these tips and lessons learned: https://www.boozallen.com/s/insight/thought-leadership/tips-for-building-a-data-science-capability-2.html

The Power of an Organizational Health Checklist