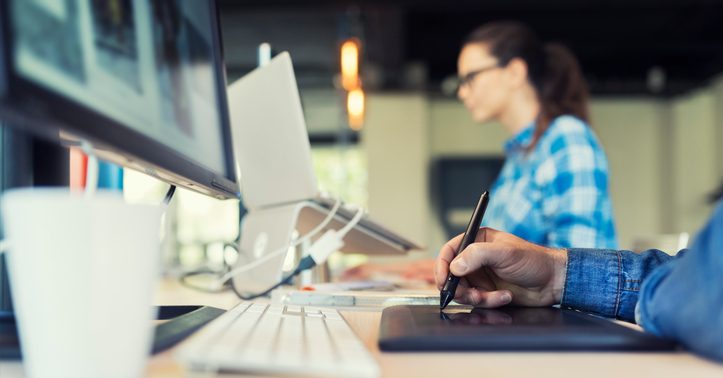 Studies have shown that engaging in thought-provoking work is key to productivity and workplace enjoyment. And yet for many people, a large part of their job is mindless – simple repetitive tasks that don’t require specialized training.

“There’s a lot of frustration across every workforce and ours where people have these mundane data entry sort of projects that they have to do, and it needs to be done,” said John Lockwood, RPA Program Manager at the Defense Logistics Agency (DLA). “They do it, and then that comprises the large portion of their workload, or maybe too large of a portion. And it doesn’t allow them to do the other things that maybe they were hired to do.”

That’s a problem, and one that RPA is helping DLA solve. The agency began implementing RPA into everyday tasks in September 2018 and plans to automate 50 processes in the first year and develop another 10 to 15 contemporaneously.

At DLA, RPA has made a difference from the start – literally. New employees experience the benefit of RPA when they’re onboarded. The bots automate a process that used to require human resources officials and IT to manually enter new employees’ information so that they could gain access to software and start working.

Now, those employees submit their information, and RPA allows them to access software applications closer to their start dates. The agency estimates it has saved $2 million in productivity from this front-end process alone, as HR and IT departments don’t have to spend time and resources on data entry, and new hires can begin working earlier.

Although these bots can expedite processes, they don’t require a system overhaul. Actually, they operate just like humans, despite lacking a physical presence.

For example, in a spreadsheet, a bot would still work cell to cell, operating in response to the formula. The bot would not, however, populate the entire document in one stroke.

“They look like a human from the systems perspective,” Lockwood said, noting that information is still restricted by access credentials. “They have an account, and they can go and log in and get the appropriate information.”

The bots that have streamlined new-hire processes at DLA are attended, meaning that they operate in response to an individual’s request. In other words, someone has to push a button to set the bot into action, and when the person logs off, so does the bot.

Some may view bots as an exciting complement to the existing workforce, but others might fear the worst – that bots are replacing employees or upheaving existing, successful workflows. That’s a natural but unfounded concern.

Lockwood said that non-IT workers have come to him asking for bots to assist in their workflows. They can frequently relieve 10 to 20 percent of an employee’s workload, Lockwood said.

The agency measures its progress by looking at hours saved instead of costs, Lockwood said. That’s consistent with the familiar public-sector sentiment of having to do more with less.

“We’re not focusing on, ‘We can replace the individual,’” Lockwood said. “We’re focusing on allowing that individual to do other things that they’re handcuffed [from] because they have to get these tasks done.”

Lockwood added that there’s potential for RPA to expand into other areas as it is implemented further. After workers see that one process can be automated, they’re interested in what’s next, he said.

This article is an excerpt from GovLoop’s recent guide, “Emerging Technology of 2019: Meet Your New Digital Coworkers.” Download the full guide here.

How GIS Can Catalyze Emerging Technologies