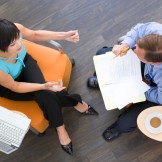 Despite the presence of outstanding leaders throughout our federal government, the bad ones have a disproportionate impact on government performance. Michael Scott may be television’s version of a bad boss on NBC’s The Office, but from what I hear, there are lots of leaders with similar failings roaming agency hallways. It may be funny toRead… Read more »