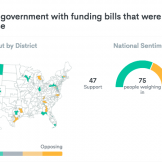 Rep. Steny Hoyer launched a website on Jan. 14 that allows the public to share their opinions about the shutdown with their elected representatives.

Take a look at the screenshot below; either Maryland Congressman Steny Hoyer was blowing off some serious steam with a string of profanity-laden tweets during last night’s State of the Union address, or the Democratic Whip has had one of his Twitter IDs, @LeaderHoyer, hacked or otherwise compromised. Twitter’s government liaison Adam Sharp has beenRead… Read more »