The New York State Council on the Arts (NYSCA) is one of the oldest and largest public funders of the arts in the U.S. The esteemed organization has served as a model for many arts organizations, including the National Endowment for the Arts. Every year, they award millions of dollars to thousands of arts organizations throughout the state and work as an advocate for arts education. The organization had not had a website update since 2001 and was in dire need of a digital overhaul.

Tomorrow Partners worked hand in hand with NYSCA’s staff and stakeholders to deliver a new digital experience that is both visually arresting and highly functional for the organization’s applicants and grantees. 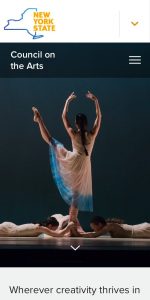 “It’s not often that a new website is a game changer for an organization, but this truly is.” Mara Manus, Executive Director, New York State Council on the Arts.

After strategic workshops to map the various audiences and user stories for the site, Tomorrow Partners prioritized the diverse needs of NYSCA’s users through rapid prototyping. They developed tools that enabled the NYSCA team to build capacity and take on the content development process.

The redesigned online experience features immersive video and photos that bring to life the rich diversity of arts NYSCA supports across New York State. Special features like an interactive timeline showcase the organization’s important place in the history of arts in the U.S.

The majority of NYSCA’s applicants who rely on the organization’s annual funding have less than five full-time staff members, meaning applicants are often strapped for time and resources. Delivering a site with easy-to-find information was of vital importance.

The site is designed as a mobile-first experience, following Section 508 compliance, and is built in Drupal 8, giving NYSCA the flexibility to manage content without needing to keep developers on staf 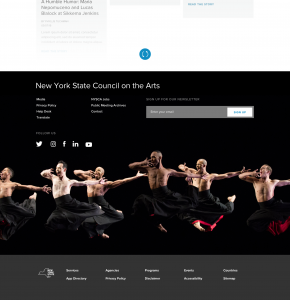 tion. The Webby awards are the internet’s most coveted and respected accolades.

The redesigned NYSCA online experience reflects New York Governor Cuomo’s vision for a more efficient, effective, and modern government, and points to a transformative new era of responsiveness, efficiency, and transparency in government interactions with citizens.

Tomorrow Partners is a Berkeley, California based design and innovation firm that partners with blue chips, start-ups, NGOs and public-sector institutions to create the future of their brands and innovations and realize new opportunities for impact.