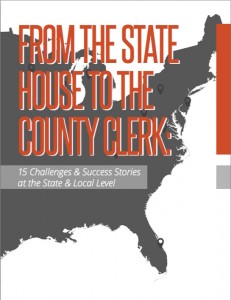 From garbage trucks to vacant lots, cities and states are often tasked with the thankless job of cleaning up a community’s mess. These are tasks that are often overlooked, but are critical to keeping a community vibrant.

But even in these sometimes thankless jobs, there are real innovations happening. Take Miami-Dade County where they are using hybrid garbage trucks to save the community millions of dollars in fuel every year and make the environment a little cleaner. Or head over to Milwaukee where the city is turning vacant and abandoned lots into urban farms.

There are just two of the fifteen examples, GovLoop uncovered in our new guide, From the State House to the County Clerk – 15 Challenges and Success Stories.

We have broken the challenges into four categories:

Here’s another example, the open data movement has the potential to effect governing and civic engagement at the state and local government levels. But today very few agencies are actively providing open data. In fact, only 46 U.S. cities and counties have open data sites. One of the cities on the leading edge of the open data movement is Fort Worth, Texas.

“When I came into office, that was one of my campaign promises, that we would get Fort Worth into this century on technology and that we would take a hard look at open records requests and requests for data,” Mayor Betsy Price said in an interview with the Star-Telegram. “It goes a lot further to being transparent and letting people participate in their government and see what we are doing. It is the people’s data, and it should be easy to access.”

The website, data.fortworthtexas.gov, offers data and documents such as certificates of occupancy, development permits and residential permits for download in several formats, including Excel and PDF. Not all datasets are available yet — the city said its priority was to put the most-requested data on the portal first. Next up? Crime data, code violations, restaurant ratings and capital projects progress.

City officials’ ultimate goal is to create and adopt a full open data policy. As part of the launch, they are also looking for local software developers and designers who want to help guide the open data initiative. Those interested in participating can sign up online to receive more information.

Fort Worth is getting kudos from those outside the city for its efforts. Crime mapping company SpotCrime noted that it had been listing Fort Worth crime stats on its site, but had to use FOIA requests to get crime data from the department for the past five years.

“We often complain about cities who don’t share crime data openly or move away from transparency and don’t give enough kudos to cities who move in the right direction,” SpotCrime officials recently wrote on the company blog. “Well, we’d like to say: Way To Go Fort Worth, TX!”

[…] to rehabbing our national conversation about the public sector. That’s why we were thrilled to see this article in GovLoop, “Uncovering State and Local Gov’s Hidden 15 Successes.” The article links to a larger […]

[…] rehabbing our national conversation about the public sector. That’s why we were thrilled to see this article in GovLoop, “Uncovering State and Local Gov’s Hidden 15 Successes.” The article links to a larger […]

Connected Government – Why it Matters & What You Can Do