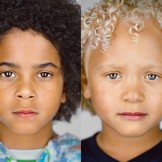 In case you missed it, July 26 marked the 23rd anniversary of the landmark Americans with Disabilities Act (ADA). The groundbreaking statute was signed into law by President George H.W. Bush in 1990 (pictured above). Since then, the ADA has been instrumental in securing justice and equal opportunity for people with disabilities in all facetsRead… Read more »

The U.S. Census Bureau recently announced the “Center of Population” for the 2010 Census. What is the “Center of Population”? According to the Census Bureau, The mean center of population is determined as the place where an imaginary, flat, weightless and rigid map of the United States would balance perfectly if all residents were ofRead… Read more »