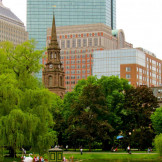 The Boston Mayor’s Office of Women’s Advancement was established in 2014. Only two years later, it’s already made significant process towards its goals of increasing women’s representation inside City Hall and within the city-at-large. In a recent interview, the Office’s Executive Director Megan Costello discussed how they’ve managed to so rapidly grow and become an impactfulRead… Read more »