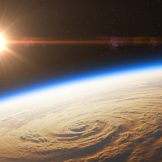 Tim Schmit has spent 20 years developing weather satellites that produce the data that goes into the life-saving forecasts that we take for granted.

The Defense Advanced Research Projects Agency has launched a new project to develop a reusable unmanned aerial vehicle that would travel to-and-from space and deploy small satellites while in orbit. DARPA also wants XS-1 to fly 10 times in 10 days, achieve speeds of Mach 10 or greater at least once and launch a representativeRead… Read more »

NASA has enlisted 13 university teams to support the agency’s small spacecraft collaborative projects. Selected teams stand to receive as much as $100,000 annually for two years and will work with agency engineers and scientists from six NASA centers, the agency announced Monday. The agency initially received 100 proposals for the Small Spacecraft Technology Program,Read… Read more »

NASA is studying a plan to use a spy satellite telescope for a proposed $1.63 billion space observatory that would study dark and search for new planets outside the solar system, Space.com reported Tuesday. Miriam Kramer writes an independent group of scientists recently concluded in a study that NASA could use two telescopes donated byRead… Read more »

An Orbital Science rocket carrying three smartphones lifted into space Sunday as NASA seeks to determine if the devices could function as flight avionics on a satellite. NASA intends for the PhoneSat spacecraft to send information on the phones’ health back to Earth for the agency determine if they can function as satellites, NASA saidRead… Read more »

Welcome to the Monday Morning News Kick Off post from the FedConnects blog. We hope you’ve had a restful weekend and are ready to be the smartest and most efficient government or contractor professional possible. Here’s all the actionable news you need to achieve these goals. Happy Monday! Department of Energy Offers Online Training toRead… Read more »